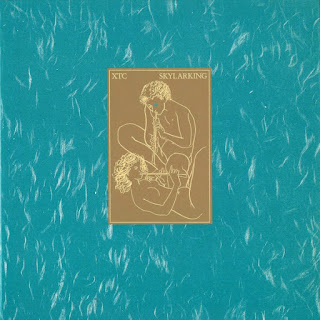 [On a Lark] -- With the exception of the very first week of April, my birthday month, I have been using the Flashback posts to feature music from 1986, the year I turned 18. And now that we have come to the end of April, we are going out with a bang.
In October 1986, English rock band XTC released their ninth studio album, Skylarking. It's a much better record for April and May, what with a third of the tracks evoking feelings of spring through summer. But that still makes sense as the album was recorded between April and June of 1986. Skylarking is one of XTC's better known records, and it reached #90 and #70 on album charts in the UK and the US respectively. Prior to recording, however, label executives had threatened to drop XTC if their next album wasn't a bigger success (their prior record, 1984's The Big Express, had been a commercial failure). Apparently, the label figured the problem was that XTC sounded "too English," so they wanted the band to use an American producer. Of the listed producers suggested to them, Todd Rundgren's name was the only one XTC recognized. On paper, a pairing of Rundgren and XTC probably looked like a smashing idea. However, the sessions were rife with tension, mainly due to clashes between Rundgren and Andy Partridge (XTC's leader as well as primary singer and songwriter). As of March 2016, there was still animosity between the two artists (Todd Rundgren Reignites Feud With XTC Over 'Skylarking').
The results more or less speak for themselves (I already mentioned its popularity and top 100 placements). And with a total of 15 solid tracks to select from, I find narrowing down to a few faves to be a difficult task. Still, I usually cite "Dear God" (about a struggling agnostic who writes a letter to God), "The Man Who Sailed Around His Soul," and "Earn Enough For Us" (which has previously appeared in a Flashback post) as my favorites on this record. Of my selections, only "Dear God" was released as a single, but it was also the b-side for the album's first single ("Grass"). That's kind of interesting given that this song was left off the original pressing, and that it caused a bit of controversy when it hit airwaves. And that was not the only controversy for this album: Apparently Andy Partridge originally had something else in mind for the album's cover art.
The entire album's playlist, including "Dear God," is embedded for your listening pleasure this weekend.
Flashback:  Skylarking (1986)
Once again, I remind you that the rule of three applies when doing Flashbacks. As I've made my three offerings, that's all till next week. Dedicated 80s-philes can find more flashbacks in the Prophet or Madman archives or via Bookended's 80s Flashback tag. As always, your comments are welcome on today's, or any other, flashback post. And if you like what I'm doing here, please share the link with your friends. If, however, you don't like the flashback, feel free to share it with your enemies.
I'll see you in seven!
Posted by Brainwise at 4/30/2021 02:15:00 PM