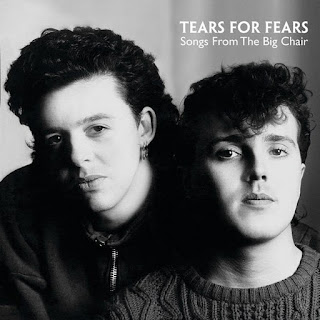 [Revisiting the Big Chair] -- If I keep getting older, I'll continue to experience big anniversaries of seminal albums from my youth. Case in point: Tears for Fears' sophomore release, Songs from the Big Chair (1985), turned 35 this week. Well, depending on your source, the album is 35 years old as of this week (Wikipedia and Discogs) or last week (AllMusic). But the fact remains that February 2020 marks the 35th anniversary of Songs from the Big Chair. BBC Classic Albums did a documentary on the album (here is a clip, but you can watch the full thing only if you are an iPlayer user in the UK). And next month, there'll be a limited picture disc version of the album as well as a reissue of the long out-of-print deluxe 4CD/2DVD boxed set. And, yes, the album deserves all this attention. It spawned several international hits, spent over half the year in the UK top ten-album chart, and lasted five weeks at #1 in the US. Those international hits I mentioned? At least one peaked in the #1 slot in multiple countries, and it is regarded as one of the most recognized songs from the mid-1980s. (It was even spoofed as a detergent commercial jingle, so I'm betting you know which tune that was.)

So, rather than parsing the album into three tracks, let's enjoy the full thing, shall we?

Flashback: Songs from the Big Chair 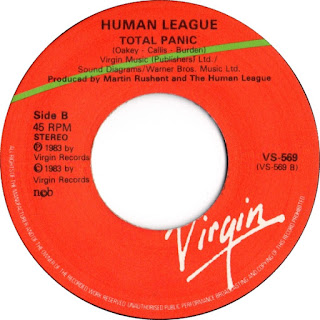 [Past Panic] -- I recently heard a song that first hit airwaves in the summer of 1983. And it made me remember someone I had not thought about in nearly 30 years. I call him Todd B. for the purpose of this Flashback post. I'm not sure when I first met Todd, but I'm pretty sure we walked to the bus stop (conveniently located at Vito's Dairy) nearly every morning from 6th through 12th grades. That means our friendship started no later than 1979. In addition to walking to and from the bus stop, we did the typical things that kids in the late 70s and mid 80s would do: Ride bicycles, walk to the community pool, ride a dirt-bike, and build a ground-level tree fort. (OK, I might need to explain that last one, but all I can say is that it made sense at the time: It was the only tree-enclosed space within a larger open area and, look, we were bored that week!) Oh, and we also listened to music. Sometimes at my house; sometimes at his. And this was back in the days of 45 records and cassette tapes (look them up, younglings). Anyway, in the summer of 1983, Todd was obsessed with one record in particular: "(Keep Feeling) Fascination." It was the second single released from The Human League's EP, Fascination! But as much as Todd liked "(Keep Feeling) Fascination," it was the B-side that really attracted his attention, and he would play it over and over and over again. That song was an instrumental titled "Total Panic." So, in honor of Todd B., wherever he is these days, here are the two songs he loved from Fascination! plus one other track (the lead single, which interestingly deals with the pain of lost friendships).

Flashback #3: "And if it seems | I'm not the one you used to know | Our little friendship | Left behind not long ago." 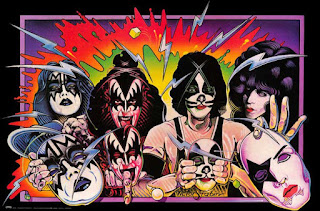 [An Awkward KISS  - redux] -- In February of 2011, I made my one and only post reflecting on Valentines of the 80s. Sure, it was a mere nine years ago, but with Valentine's Day falling on a Friday this year, I figure now is as good a time as any to repeat it.

I spent the first half of the 80s in junior and senior high school, so most of those "celebrations" can be filed under the category of awkward. That's just the nature of the pre-teen and teenaged experience. Now, the members of KISS, who had been the object of many teenagers' hero worship through the 70s, probably were not awkward (or even necessarily honorable) in their dealings with members of the opposite sex , but the start of the 80s did find them at an awkward point in their career. They entered the decade strong: To their credit, they had a string of eight Platinum-selling albums, the last five of which included the interesting gimmick of their four "solo" albums -- all released on the same day in 1978 -- and the disco-influenced Dynasty of 1979. But they also greeted the new decade with internal tensions, Peter Kriss and Ace Frehley being particularly dissatisfied, and musical identity issues. Kriss and Frehley were therefore less-involved with the recordings of this period and they eventually left the band in 1980 and 1982 respectively. KISS eventually experienced something of a rebound in the late 80s, probably due to the convergence of glam/hair metal rising in popularity and an increase in KISS nostalgia. But 1980 - 1983 were pretty much a low point for the band. So, what could I possibly choose as showcase songs for today's Flashback set?

Read and hear more after the jump.

[Stay Awake (Redux)] -- In February of 2000, after we eloped, Mrs. Brainwise and I flew to Walt Disney World for our honeymoon. Shortly thereafter, we made the plan to return to the House of Mouse every five years to celebrate our anniversary. And so, this week, we are back at Walt Disney World to celebrate 20 years togeether. This week marks my fifth visit to Walt Disney World with my wife (and my seventh time here overall when I add in previous family trips). Seems like a good excuse for me to revisit Hall Willner's Stay Awake: Various Interpretations of Music from Vintage Disney Films (1988). Willner is an American music producer with several tribute albums and live events listed among his many credits, Stay Awake being his fourth tribute album. I was in college when it was first released, and I loved it because it made a somewhat adult soundtrack out of songs originally created for kids. More than 20 years later, I still love it for the milestone in my life that it represents. When I first blogged about this album in 2013, I wrote that our Disneyland guide had never heard of Stay Awake. It is possible that many of my fellow 80s-philes are likewise still unaware of this album. So, I figure this CD makes for a great Flashback. I've chosen three tunes from the 20+ songs represented on the album. You know the drill: Read and hear more after the break.
[CONTINUE] »
Posted by Brainwise at 2/07/2020 08:00:00 AM No comments: 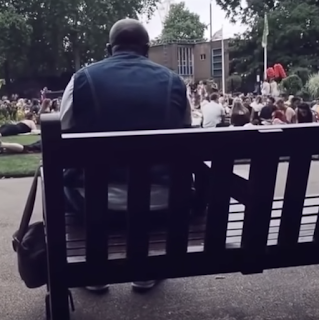 [Bon Jovi in the Park] -- Sometimes the perfect post idea either into your lap, or you see it while scrolling your Facebook feed. Today, it is the latter. SciBabe shared a TwistedSifter.com post: "Random Guy on Park Bench Starts Belting Bon Jovi and Everyone Joins In." It's short, sweet, and a perfect boost if you need one. Here is the park video on YouTube: