No, not hitting each other,  although that could happen over the Batman Jim Lee Exclusive, you never know. This post is about storing and retrieving your comic-con gear. We're going to share with you an the idea that we implemented 2 SDCC's ago...

You might recognize Marian Call as the main figure in the above image. She's one of our favorite people on Twitter and in our earbuds; we've even had the pleasure of hanging out with her at SDCC and ECCC. You might also recognize a younger David Bowie in the inset of the above image. And, maybe, you've correctly identified it as coming from Bowie's 1969 music video for "Space Oddity." However, unless you're on Marian's mailing list, or connected with one of her loyal fans, you might not know just what the two nearly mirror images have to do with each other.

Well, I'm going to tell you.

Several days ago, I received Marian's latest newsletter email. It contained info about upcoming appearances, a new album in the works, and a video oddity. Regarding that last item, it seems that Marian got together with Alaska Robotics, Molly Lewis, and Seth Boyer to make a video. And they didn't do just any ol' video. No, they went and sweded the aforementioned music video for "Space Oddity"! Oh, and on top of that, they redid the lyrics so as to use only the 1000 most used words in English (see Randall Munroe's Up-Goer Five on xkcd.com).

Now, in case you're not familiar with the concept of sweded films, it refers to the recreation of popular pop-culture films using limited budgets and technology -- mainly a handheld camcorder and whatever odds and ends you can scrape together as props. It has been heralded as "the end of Hollywood as we know it," and the term has its roots in the 2008 film, Be Kind Rewind. And, lo, a pop-culture phenomenon was born!

But back to Marian Call and the point of this entry...

If you see only one music video this month, or one sweded film this month, it really should be this one. I mean, c'mon, even David Bowie's website is promoting it!

The Property by Rutu Modan

So Brainwise left a book/graphic novel(?) on my pile to read - The Property by Rutu Modan. I honestly don't remember what he told me about the book that made him want me to read it. But I left it in my pile... for quite awhile. Today I decided to read it.

It turns it out it is about a Grandmother and Granddaughter who travel to Poland to supposedly reclaim some property. Now here is the weird part, I have always had an affinity for Jewish culture and history. I am not sure why but I am always drawn to Jewish things. So I assume this is why Brainwise gave me the book. I wonder though, if he recalls that my Grandmother's name was Regina, the same as the Grandmother in this book. That hit home and then as I read the book all I could think about was what my Grandmother had gone through in her life.

In this book Regina was sent away from her first true love who had gotten her pregnant. He didn't know what happened to her and she was always hoping she would get back to him. Well, she does get back to him although I am not sure he realized it at first. It turns out Regina's true plan for the trip was to meet up with this man. She wanted to tell him that their son had passed away two months before. The son is also the Granddaughter's father. The Granddaughter had no idea about this story but she does learn it through the various people she meets while trying to find the property.

They are in Warsaw for Zaduszki and it plays a major role in the story. I honestly can not recall this "holiday" but I will say I wish I could have travelled to Poland with my Grandmother for this "holiday". I wish so much my Grandmother were here now so I could ask her more questions about her life. The Granddaughter in this story was very lucky to learn all the secrets of her family and to finally meet her Grandfather.

As for the property, it turns it out it is where the Grandfather lives. He "bought" it from the Regina's parents to protect it during the war and he was to return it once he received Regina's address of wherever she was at the time. Well as we already can guess, this does not happen, as Regina turns up at the door instead. She does not want the property, only the closure of the relationship with her first true love.

This is quite the story with many intersecting parts. It is beautifully drawn and a very easy read. There are also lots of funny things that only Polish people will understand. So if you have any affinity for Jewish tales or Polish heritage you will want to check out this book.

I give The Property 4 paws: 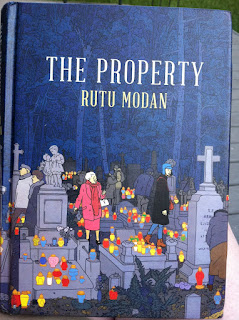 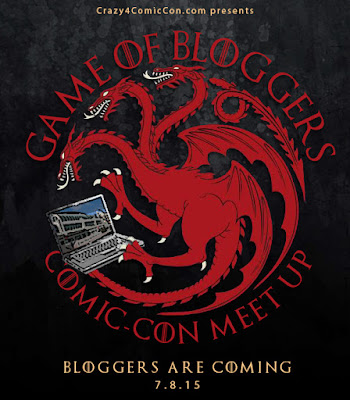 For our fifth consecutive SDCC, we will be part of the Game of Bloggers Meet-Up hosted by the one and only Crazy 4 Comic Con! If you're going to SDCC this year, and you're free on Preview Night (Wednesday July 8th), come join us and more cool-and-nerdy bloggers than you can shake a sonic screwdriver at!