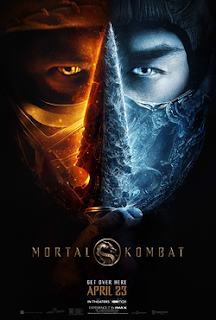 All I remembered going into this movie was playing the video game a couple of times with a friend of mine over 25 years ago. I remember the two of us going all out with hitting the buttons to just attack over and over and over - even physically pushing each other to help - until one of us would win by chance. I loved it! I miss it! LOL

I really liked this movie. It was a story that you could follow even if you had no previous knowledge of the game or other movies. It was action galore! It was funny. It was poignant. It was ultra violent - like 'oh my goodness I can’t believe they showed that' violet. It more than earned its R rating. But I loved it. I mean, come on, it’s Mortal Kombat not Candy Land.

I loved the actors chosen for all the roles, except perhaps Shang Tsung, he didn’t seem edgy enough for the role but he wasn’t bad, just not perfect. Kano was too perfect, man I hated him but really that is a good thing.  Lewis Tan as Cole was spectacular but Hiroyuki Sanada was perfection. I adore this actor and was thrilled to see him cast in the movie. He portrays Hanzo Hasashi and I couldn't imagine anyone else in the role. I felt he was born to play this role and he did not disappoint.

The music was also perfection! I kept turning up the volume because I just wanted to be immersed in the sounds. Benjamin Wallfisch composed the heck out of this movie.

There was a section where I thought the fighting was going on a bit too long and I read that they had cut some fights, which I am grateful for as it would definitely would have been too much. I normally balk at all the violence but again, this was Mortal Kombat and it was completely expected and ok overall with me.