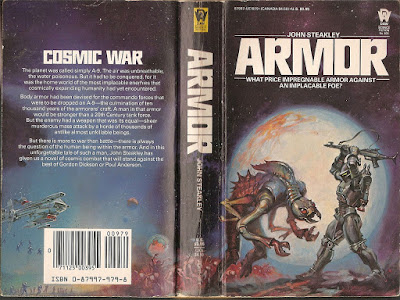 // It was an odd being which rose from Felix and through him. It was, in fact, a remarkable creature. It was a wartime creature and a surviving creature. A killing creature. From a distant place, the frightened Felix scanned himself. He recognized little. Still, what he saw was a comfort of sorts and he concentrated himself toward it, toward the coldness, die callous machinelike... The Engine, he thought. It’s not me. it’s my Engine. It will work when I cannot. It will examine and determine and choose and, at last, act. It will do all this while I cower inside. //

I finished another re-read of ARMOR by John Steakley (1951 - 2010) over the weekend. As I recall, I first read this novel in the late 1980s. I next read it in the mid-1990s. I'm not sure if this latest revisit is my third or fourth. But I will say that, for the most part, I think this book still holds up as an exploration of the psychological toll on combatants -- think STARSHIP TROOPERS (the novel, not the movie), but with better battles and more internal examinations. On second thought, it doesn't matter whether you compare the novel ARMOR to either form of STARSHIP TROOPERS; the simple truth is that ARMOR is superior.

Some reviewers have pointed out that the shift in perspective from Felix the military scout in Part 1 to Jack Crow the mercenary in Part 2 is jarring and maybe unnecessary. I've also seen the argument that, maybe, Steakley just jammed the manuscript from another unfinished novel into ARMOR and then stitched them together in Parts 3 and 4.  I suppose that is possible. I also suppose that attitude might be a conceit from modern (post 2000s) reviewers having trouble with a form of storytelling (military sci-fi) that was in its nascent development in the late 1970s and through the 1980s. I liken it to kids these days being frustrated with the storytelling and editing of classic films.

Anyway, like I said, the novel more or less holds up. Some aspects are even reminiscent (or would that be prescient?) of military conflicts that occurred decades after its publishing.

I found the image for this post online, but it's a good match for my 1984 printing of the paperback.

"That’s the trouble with armor. It won’t protect you from what you are.” ~The Masao to Felix

Email ThisBlogThis!Share to TwitterShare to FacebookShare to Pinterest
Labels: Book