[Goodbye Mom] -- I was more than two thirds of the way through writing my latest Flashback post, but I no longer want to use it. Not this weekend. You see, here's the thing. My sister called me around 5pm yesterday and told me that our mother was gone, that she had unexpectedly died overnight. Sis had gone over to Mom's house to check on her, as per usual, but instead found ... well, she found that Mom never made it out of bed that day.

So, my one and only flashback song for this weekend is for the memory of our mother. I'm cribbing both the tune and the write-up from a previous Flashback post, but so be it. It is probably no surprise that I could reliably turn to Disney for a song that honors the very heart of motherhood. Well, I sort of turned to Disney. I turned to Hal Willner, an American music producer with several tribute albums and live events listed among his many credits. In 1988, Willner released his fourth tribute album, Stay Awake: Various Interpretations of Music from Vintage Disney Films. Stay Awake featured new recordings of Disney tunes by a whole range of performing artists, from Sun Ra to Michael Stipe, and from Buster Poindexter to Ringo Starr. This is still one of my favorite CDs from the 80s. At the time, I loved it because it made a somewhat adult soundtrack out of songs originally created for kids. Almost 30 years later, I still love it for the milestone in my life that it represents. The second track on Stay Awake pairs Bonnie Raitt with Was (Not Was) on "Baby Mine" from the 1941 film Dumbo. And it never fails to make me think of my own mother. 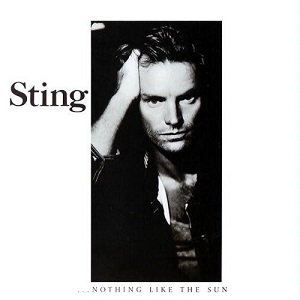 [October Sting] -- I thought about doing a more spooky theme for that rare occasion that the Flashback crosses paths with Friday the 13th, but I wasn't in the mood. But then I found that Sting's second solo album, ...Nothing Like the Sun, was released on this very day in 1987. That means one of my favorite records turned 30 today! This release finds Sting continuing the pop-jazz explorations of his fantastic debut album, The Dream of the Blue Turtles (1985), but stretching his chops to mix in a little reggae and funk as well as some standard acoustic, rock, and dance elements. All five singles from the album charted, with two peaking as top 40 hits. The album peaked at #9 on the U.S. Billboard 200 and and #52 on U.S. Billboard R&B Albums. And if the songs themselves weren't enough to merit this album's place in my heart, then the story of how Sting named it surely would do the job. The title comes from from Shakespeare's Sonnet No. 130, which Sting had used in response to a wandering drunk who kept accosting him with the question: "How beautiful is the moon?" You can read that brief story in the November/December 1987 edition of Spin. And for this week's selections, you can read and hear more after the jump.
[CONTINUE] »
Posted by Brainwise at 10/13/2017 05:00:00 PM No comments: