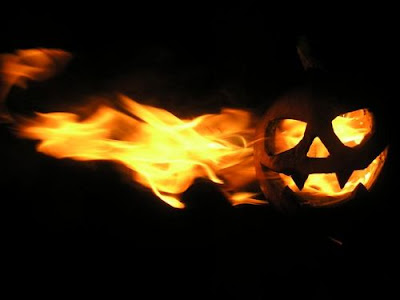 [Halloween!] -- Though not quite as rare as a full moon falling on Halloween, this year the spooky holiday also occurs very close to Friday. That means it's time for a very special Halloween edition of the Friday 80s Flashback. Now, I'm sure you've all been good little ghouls and ghosts. So, to ensure you get the most 80s goodness possible, and that you receive it in a timely manner, I'm revisiting the mega-Flashback I originally posted for Halloween 2011. I thoroughly checked it and updated any video or text links that were broken over the last several years. And, just like in 2011, and 2020, you can check out all the tunes featured in this week's flashback as a single video playlist! And it's six tracks, twice the content of my standard themed weekly offerings! Of course, you can still check out the songs one at a time, the option which includes my comments and recollections. But either way, you're getting great 80s music for the Halloween weekend! So, if you are opting for your flashbacks one-at-a-time, you can read and hear more after the break.
[CONTINUE] »
Posted by Brainwise at 10/29/2021 02:28:00 PM No comments:

[Goodbye Mom - Redux] -- By Friday, October 20, 2017, I was more than two thirds of the way through writing a Flashback post, but I no longer wanted to use it. My sister had called me around 5pm the prior day and told me that our mother was gone, that she had unexpectedly died overnight. Sis had gone over to Mom's house to check on her, as per usual, but instead found ... well, she found that Mom never made it out of bed that day. Her memorial service was the following Wednesday, 10/25/2017.

So, my one and only flashback song for that -- and this -- weekend is in memory of our mother, gone too soon at age 71. I'm cribbing both the tune and the write-up from a previous Flashback post, but so be it.
It is probably no surprise that I could reliably turn to Disney for a song that honors the very heart of motherhood. Well, I sort of turned to Disney. I turned to Hal Willner, an American music producer with several tribute albums and live events listed among his many credits. In 1988, Willner released his fourth tribute album, Stay Awake: Various Interpretations of Music from Vintage Disney Films. Stay Awake featured new recordings of Disney tunes by a whole range of performing artists, from Sun Ra to Michael Stipe, and from Buster Poindexter to Ringo Starr. This is still one of my favorite CDs from the 80s. At the time, I loved it because it made a somewhat adult soundtrack out of songs originally created for kids. Over 30 years later, I still love it for the milestone in my life that it represents. The second track on Stay Awake pairs Bonnie Raitt with Was (Not Was) on "Baby Mine" from the 1941 film Dumbo. And it never fails to make me think of my own mother.
R.I.P. Mom (August 1946 - October 2017).
"You're so precious to me | Cute as can be | Baby, you're mine."
Once again, I remind you that the rule of three applies when doing Flashbacks. As I've made my three offerings, that's all till next week. Dedicated 80s-philes can find more flashbacks in the Prophet or Madman archives or via Bookended's 80s Flashback tag. As always, your comments are welcome on today's, or any other, flashback post. And if you like what I'm doing here, please share the link with your friends. If, however, you don't like the flashback, feel free to share it with your enemies.
I'll see you in seven!
Posted by Brainwise at 10/22/2021 03:00:00 PM No comments: 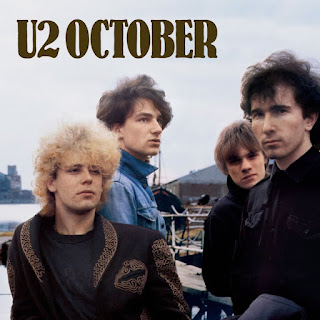 [October at 40] -- 40 years ago this week, on 10/12/1981, U2 released their sophomore album, October. Much of the album's lyrical content is spiritual in nature as three of the four bandmates were in a Christian group, called the "Shalom Fellowship," although the three were not necessarily similar in devotion. In fact, Bono (vocals) and Edge (guitar) were unsure whether rock and roll was at all compatible with a professing Christian lifestyle, and they both exited the band, albeit temporarily. Perhaps their return indicated a cessation of doubt, hence the album's references to exultant rejoicing ... and the Latin liturgical chorus on the lone hit, "Gloria." And while "Gloria" is not the only standout track, the album's lack of cohesion makes it suffer and seem more like a stumble after their much more confident debut, Boy (1980). October received mixed reviews, although Dave McCullough of Sounds gave it high praise, concluding his review with, "This October will last forever." And, perhaps, this album is best appreciated in retrospect, as tiny glimpses of what was yet to come from the Dublin Ireland quartet. Even Bono said during this time, “I don’t really feel U2 has been born yet." They were still learning, and still developing. What a journey it has been.
Flashback: October (10/12/1981)
That's all till next week. Dedicated 80s-philes can find more flashbacks in the Prophet or Madman archives or via Bookended's 80s Flashback tag. As always, your comments are welcome on today's, or any other, flashback post. And if you like what I'm doing here, please share the link with your friends. If, however, you don't like the flashback, feel free to share it with your enemies.
I'll see you in seven!
Posted by Brainwise at 10/15/2021 07:09:00 PM No comments: 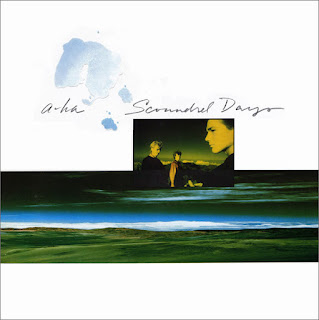 [Scoundrel Years] -- 35 years ago this week, Norwegian new wavers A-ha released their sophomore record, Scoundrel Days. This studio album featured the huge hit ... well ... um ... if you were part of the casual US record buying market in 1986, you probably don't recall any hits from this album. Of course, you might not recall any A-ha songs beyond "Take On Me" and "The Sun Always Shines on T.V." from their 1985 debut, Hunting High and Low. And maybe you've heard their 1987 Bond theme, "The Living Daylights." But you probably gave a pass to Scoundrel Days which peaked at a mere #74 on the US Billboard 200 and had one top 50 track in the states.
Let's back up. You see, after the success of A-ha's debut album, their record company was hungry for a cookie-cutter follow up. But the band was ready to move on, and they basically responded with, "No, we don't want to record another 'Take on Me,' we're doing our own thing" (Rolling Stone, 2010). And that was a good decision. While the US largely ignored Scoundrel Days, it turned out to be an international hit. The record racked up Platinum sales as it hit #2 in the UK and #4 in Belgium, Germany, and New Zealand; it even broke into the top 10 in Austria, the Netherlands, France, Japan, and Switzerland. Three of the singles -- "I’ve Been Losing You," "Cry Wolf," and "Manhattan Skyline" -- were top 40 hits in the UK and many other countries. "Cry Wolf" was the only single released in the US and it performed admirably (if still disappointing for record execs) on several US charts; it peaked at #14 on US Dance Club Songs, #30 on US Dance Singles Sales, #51 on US Cash Box Top 100 Singles, and #50 on the US Billboard Hot 100.
It's a solid record, and you owe it to your 1980s-loving heart to give it a listen. And, uh, let me know what you think of "We're Looking For The Whales" and "The Weight of the Wind," would ya? You'll find them as tracks #7 and #8 on the CD (or the YouTube playlist), or the second and third tracks on side B of the vinyl or cassette.
Flashback: Scoundrel Days (1986)
That's all till next week. Dedicated 80s-philes can find more flashbacks in the Prophet or Madman archives or via Bookended's 80s Flashback tag. As always, your comments are welcome on today's, or any other, flashback post. And if you like what I'm doing here, please share the link with your friends. If, however, you don't like the flashback, feel free to share it with your enemies.
I'll see you in seven!
Posted by Brainwise at 10/08/2021 02:00:00 PM No comments: 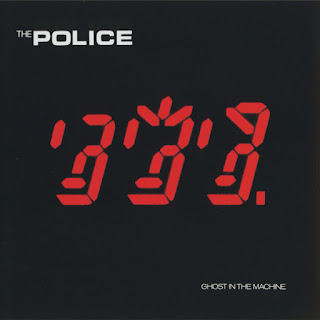 [Ghost in the Month] -- I'm kicking off October 2021 with an album that was released 40 years ago on Saturday. I'm talking about Ghost in the Machine, the fourth studio album by The Police, which was released on October 2, 1981. After their first three records, The Police were legit stars. And while they had already been rather clever in their lyrics as well as their hooks, Ghost in the Machine found the trio going to another level as both visionary and, if truth be told, pretentious songsmiths. For starters, the album title was based on Arthur Koestler's 1967 philosophical book, The Ghost in the Machine, about the mind-body relationship. Second, bassist/vocalist -- and primary songwriter -- Sting worked many of the book's theories (such as the notion that humans should not be too machine-like) into his latest songs. "Spirits in the Material World," the album opener, is pretty much a three-minute musical summation of Koestler's work (according to Ultimate Classic Rock). Musically, this album found the band making heavy use of keyboards and horns for the first time. Andy Summers (guitarist) is on record as not being a fan of this change in the band's musical direction:

"I have to say I was getting disappointed with the musical direction around the time of 'Ghost In The Machine'. With the horns and synth coming in, the fantastic raw-trio feel - all the really creative and dynamic stuff - was being lost. We were ending up backing a singer doing his pop songs. But there were still great moments when Sting was able to loosen up enough, where we could really go for it in concert." ~Andy Summers: Guitar Player, 1/94

Still, accusations of pretension and Summers' complaints aside, the shift was successful. Ghost in the Machine peaked at #1 and #2 on the UK Albums Chart and the US Billboard 200 respectively. And all three US singles ("Every Little Thing She Does Is Magic," "Spirits in the Material World," and "Secret Journey") charted on the US Billboard Hot 100. The first UK single, "Invisible Sun," peaked at #2 on that nation's chart.
Ghost in the Machine is a darker outing for The Police, both in terms of theme and band dynamics, but it's also a masterpiece. And it was possibly a bit ahead of its time.
Flashback: Ghost in the Machine (1981)
That's all till next week. Dedicated 80s-philes can find more flashbacks in the Prophet or Madman archives or via Bookended's 80s Flashback tag. As always, your comments are welcome on today's, or any other, flashback post. And if you like what I'm doing here, please share the link with your friends. If, however, you don't like the flashback, feel free to share it with your enemies.
I'll see you in seven!
Posted by Brainwise at 10/01/2021 02:00:00 PM No comments: