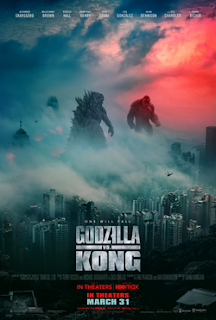 Let me start with I LOVE Godzilla. I have been watching Godzilla since I was a child. My paternal grandparents watched Godzilla all the time and always included me if I was visiting. So not only do I love Godzilla but he brings back such amazing memories for me.

That said this was not a Godzilla movie to me... this was a King Kong movie. I don’t dislike King Kong but I definitely prefer Godzilla. Overall the movie was ok. It was nice eye candy and I am shocked at how there were a few things that were NOT spoiled for us and I will not spoil it here either.

King Kong was HUGE and Godzilla looked a little odd to me. They definitely worked things to be in Kong’s favor and that is one reason why this was a King Kong movie and not a Godzilla movie.

We did laugh at how the movie harkened back to the old poorly acted originals but I actually don’t think it was the actors as much as the material they were given. But I have to say if I could be part of a Godzilla movie, I don’t think I would care what my lines were at all. I would just love to be a part of the spectacle and I am imagining that was the case for this cast.

The young deaf girl was fantastic and I would love to see her in many more roles. When she was on the screen, I couldn’t keep my eyes off her, she was striking to me. I did also like the multi-cultural cast but found it hilarious that the one scene in Hong Kong only showed “Americans”.

We all know we don’t watch these movies for the story or the humans and that was very true of this movie. But I almost wasn’t sure I would watch at all once the music played. What was up with the music choices??? It was very jarring to me, so we just laughed through them and waited for the action scenes.

I await the next pure Godzilla movie 🍿 and I won’t complain too much about this one because I definitely want another Godzilla movie. I should also add that I would like to see this in IMAX at some point because as I said earlier in this post, the movie was very good eye candy.