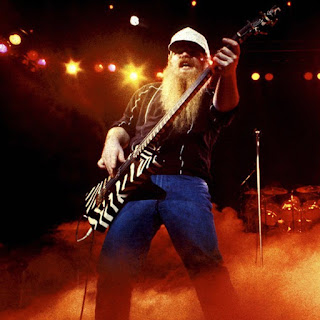 [R.I.P. Dusty Hill] -- “I like to believe that I play bass like Dusty Hill, and that's something nobody else can do as well as me. I'm the best Dusty Hill I know.” ~Dusty Hill (May 19, 1949 – July 28, 2021) in reply to a 2010 Q&A in CLASSIC ROCK magazine.
I posted that quote on several of my social media accounts on 7/28/2021, after I had read the news that Texas musician, Dusty Hill, had died in his sleep. There are news stories (AP News, for example) and tributes all over the web. The outpouring of emotion for 72-year-old Hill is understandable. He was not only ZZ Top's bass player, and other bearded dude, he was also, on occasion, the band's keyboard player. Plus, he sang backing and lead vocals. Dusty Hill was the man who held the bottom line for so many songs in the soundtrack of my life, especially from the late 1970s through the 1990s.
So, this week's Flashback cycles through a trio of ZZ Top's 1980s catalog featuring Dusty Hill on lead vocals. Can you guess what made the cut? Read and hear more after the jump.
[CONTINUE] »
Posted by Brainwise at 7/30/2021 10:01:00 PM No comments: 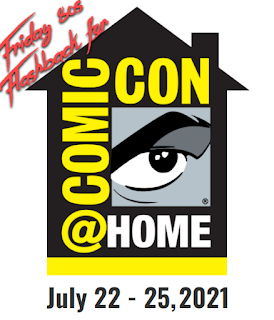 [Comics and SDCC!] -- After the year that was 2020, I had hoped we might be in San Diego for San Diego Comic-Con (SDCC) this week. Unfortunately, the COVID-19 pandemic was still not fully under control when convention organizers were working on their plans, so their March 2021 announcement indicated SDCC would be virtual, again. If you are unfamiliar with the event, here's some background: It was founded in 1970 as the Golden State Comic Book Convention. As it grew, this convention was later rebranded with the name we have come to know and recognize. SDCC bounced among several locations in San Diego until it landed at the San Diego Convention Center where it has been held since 1991 (with the exceptions of the virtual event in 2020 ... and now in 2021, too). SDCC is now widely recognized as a juggernaut of TV and film events. So much so that critics regularly complain it's "not about comics anymore!" However, there is still plenty of comic book related activity at SDCC, as Comic Spectrum pointed out in 2018 and in 2016.

To celebrate SDCC 2019, I selected several 80s tunes inspired by, about, or somehow related to comic books. And I repeated that formula for 2020's ComicCon@Home. Even after those two years, I still had some tracks that did not make either of my previous playlists, so I'm using them this year. What made the latest playlist? Read and hear more the jump.
[CONTINUE] »
Posted by Brainwise at 7/23/2021 11:00:00 AM No comments: 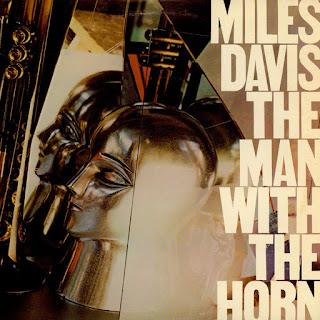 [The Return of the Man with the Horn] -- Forty years ago this month, Miles Davis came out of a reclusive retirement with a brand new record, his first in six years. The Man with the Horn (note the reference to his 1952 album, Young Man with a Horn) finds Davis blending his traditional horn playing style with 1980s pop, funk, and fusion. AllMusic considers this record something of a shaky comeback. However, I find it to be an interesting, and somewhat invigorating, entry in the venerable musician's catalog. I particularly enjoy "Back Seat Betty" and "Shout" – both of which are good songs for summer drives. According to George Cole, this record featured three different bands, and it went Gold (selling over 100,000 copies). Those details and others are compiled in Cole's post on the 30th anniversary of The Man with the Horn.
Flashback: The Man with the Horn (1981)
That's all till next week. Dedicated 80s-philes can find more flashbacks in the Prophet or Madman archives or via Bookended's 80s Flashback tag. As always, your comments are welcome on today's, or any other, flashback post. And if you like what I'm doing here, please share the link with your friends. If, however, you don't like the flashback, feel free to share it with your enemies.
I'll see you in seven!
Posted by Brainwise at 7/16/2021 11:25:00 PM No comments: 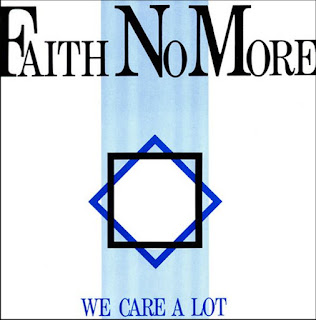 [She Is A Lot] -- I have one, and only one, song for you this week in the Flashback. My wife experienced a rather long day at work today. And while she was telling me about it this evening, her story included the fact that she told someone, and I quote, "I am a lot." She said it a few times in that conversation, so she quoted herself more than once tonight. Meanwhile, in my head, I'm hearing those four words to the tune of Faith No More's "We Care A Lot."
Welcome to my brain.
There are three versions of "We Care A Lot." The first was the title track of Faith No More's debut album in 1985. The second version, a re-recording with new lyrics, was the lead single for the band's 1987 release, and major label debut, Introduce Yourself. That version peaked at 53 on the UK Singles Chart. Both the first and second versions of "We Care A Lot" were recorded with Faith No More's original vocalist, Chuck Mosley. The third version, a live recording, was made with the band's second and current vocalist, Mike Patton. This live version is available on Faith No More's only officially released live record, You Fat Bastards: Live at the Brixton Academy (Video 1990, Audio 1991).
Oh, and this week's flashback may be only one song, I've included all three versions for you, starting with the most popular one. You're welcome!
Flashback: "Oh, it's a dirty job but someone's gotta do it  |  Said it's a dirty job but someone's gotta do it."
"We Care A Lot" (1987)
"We Care A Lot" (1985)
"We Care A Lot" (1990)
Well, that's all till next week. Dedicated 80s-philes can find more flashbacks in the Prophet or Madman archives or via Bookended's 80s Flashback tag. As always, your comments are welcome on today's, or any other, flashback post. And if you like what I'm doing here, please share the link with your friends. If, however, you don't like the flashback, feel free to share it with your enemies.
I'll see you in seven!
Posted by Brainwise at 7/09/2021 09:48:00 PM No comments: 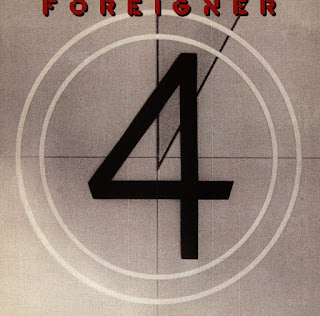 [Juke Box Heroes] -- 40 years ago today, Foreigner released 4, also known as Foreigner 4. The album's title had a dual purpose: It indicated the band's fourth studio album, and it represented the band's new status as a quartet. Various session players helped with the recording process, or on tour, but the band's primary members were Lou Gramm (lead vocals), Mick Jones (keyboards, guitars), Rick Wills (bass), and Dennis Elliott (drums). This four-person lineup is the one that endures in my memory when I think of Foreigner even though I did have Foreigner's previous three records, or at least 45s of singles from those albums.
While their first three records had helped establish Foreigner as something of a top AOR band and headliner, not to mention a commercial success with platinum sales, 4 was the break-through record they had been trying to release. Maybe some of that can be attributed to "Mutt" Lange on production, maybe some of it was due to a streamlining of songwriting efforts. Whatever the case, 4 launched the band into even greater success. The album held the #1 position on the Billboard album chart for 10 weeks, and it spawned multiple hit singles, including two entries in the #1 position on the Mainstream Rock chart: "Urgent" and "Waiting for a Girl Like You." I do like both of those tracks, but my favorite song on this album has to be "Juke Box Hero" which peaked in the #3 slot of the Mainstream Rock chart.
Foreigner never quite equaled the commercial or critical success of 4. The embedded playlist below has all 10 tracks of the original release as well as two bonus tracks from the 2002 release, but it has only one of the original music videos (the one for "Urgent"). If you want to see Foreigner's original music videos for the five singles, visit this 40th anniversary post from 93.7 The River.
Flashback: Foreigner 4 (1981)
That's all till next week. Dedicated 80s-philes can find more flashbacks in the Prophet or Madman archives or via Bookended's 80s Flashback tag. As always, your comments are welcome on today's, or any other, flashback post. And if you like what I'm doing here, please share the link with your friends. If, however, you don't like the flashback, feel free to share it with your enemies.
I'll see you in seven!
Posted by Brainwise at 7/02/2021 05:33:00 PM No comments: