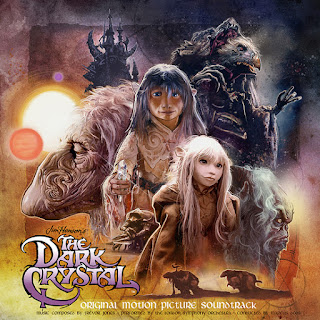 [The Great Conjunction] -- In honor of 1982's The Dark Crystal, which turned 35 in 2017, and its new spinoff series, The Dark Crystal: Age of Resistance, I thought this week's Flashback should revisit the original movie's soundtrack. The Dark Crystal was billed as the first live-action movie with no human actors on screen. And even without that distinction, The Dark Crystal was still an amazing feat of puppetry and animatronics. I like to say this film is a mix of The Hobbit (in terms of themes) and The Muppet Movie (in regards to the technical elements of bringing the characters to life). It is definitely one of the more creative movies of the early 80s, if not the entire decade. Jim Henson and Frank Oz -- with the help of David Odell (screenplay), Brian Froud (concept artist), and others -- created a fully fleshed out fantasy world of the planet Thra.

Speaking of "and others," Trevor Jones' musical score was -- let's say instrumental -- to that effective bit of world-building. The Original Motion Picture Soundtrack was released on vinyl and cassette in 1982, CD in 2007, and digitally in 2017. In addition to the standard CD release in 2007, a limited edition CD set was also available, and it featured a reissue of the original soundtrack album on disc 1 and a previously unreleased film score on disc 2. For our purposes, I've embedded the the playlist for the reissue of the original 13-track score. Trevor Jones originally wanted to use acoustic instruments and strange electronics, but instead opted for an orchestral score performed by the London Symphony Orchestra. Enjoy!

Flashback: "When single shines the triple sun | What was sundered and undone | Shall be whole, the two made one | By Gelfing hand or else by none." (prophecy about the Dark Crystal)