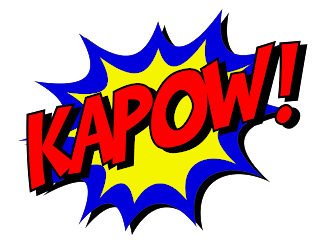 [Comics!] -- I'm currently in San Diego for the San Diego Comic-Con (SDCC). It started with Preview Night on July 17th, and it will roll through until Sunday, July 21. This year is the 50th anniversary of the venerable Nerdhalla. It was founded in 1970 as the Golden State Comic Book Convention. As it grew, this convention was later rebranded with the name we have come to know and recognize. SDCC bounced around to several locations in San Diego until it landed at the San Diego Convention Center where it has been held since 1991. SDCC is now widely recognized as a juggernaut of TV and film events. So much so that critics regularly complain it's "not about comics anymore!" However, there is still plenty of comic book related activity at SDCC, as Comic Spectrum pointed out last year and in 2016. To celebrate SDCC this year, I've selected several 80s tunes inspired by, or about, comic books. What made the latest playlist? Read and hear more the jump.

R.E.M. covered The Clique's 1969 song, "Superman," on their 1986 album, Life's Rich Pageant. Their version was much more popular than the original.

Flashback #2: "Simply fiendish, a child caught in a grown up world."

This 1985 single from The Damned was based on Grimly Feendish, a character in the UK children's Wham!, Pow! and Smash! comics from the 1960s.

2019 marks the 80th anniversary of Batman in comics, as well as the 30th anniversary of BATMAN 1989, the Tim Burton film. So, it's only appropriate we end this week's Flashback with ... "Batdance" by the gone, but never forgotten, Prince!