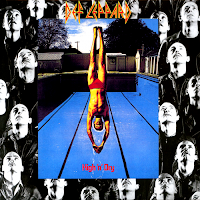 [High 'n' Dry] -- 38 years ago this week, Def Leppard released their second full length album, High 'n' Dry (1981). This record charted at #38 on the Billboard 200 in the US, and #26 on the UK's Albums Chart. Those are good rankings, but Def Leppard didn't really achieve breakout status until 1983, with their third album, Pyromania. And after the success of Pyromania, High 'n' Dry entered the charts for the 2nd time. The first time around, High 'n' Dry released two singles: "Let It Go" and "Bringing On The Heartbreak." The latter of the two was remixed and re-released as a single in 1984. This is a seminal record in the annals of hard rock history. But I have to admit, I didn't really pay attention to it until after Pyromania. But looking back on it, I can see Def Leppard's craft developing. Was it evident that their brand of working class hard rock was going to conquer the charts? Well, I don't know about that. But I do know the band's guitar riffs and vocal tracking were developing quite nicely. At least, if you're a fan of that kind of thing, and I definitely am.

For this week, I couldn't pick just three tracks. So, I'm featuring the entire album. Enjoy!