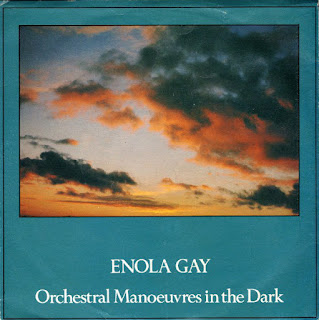 [Enola Gay] -- August 6, 1945: A Boeing B-29 Superfortress dropped an atomic weapon on Hiroshima, Japan. It was the first atomic bomb used in combat. That bomb was codenamed Little Boy, and the plane that delivered it was the Enola Gay. 35 years, 1 month, 21 days later, the British synth-pop group Orchestral Manoeuvres in the Dark (OMD) released "Enola Gay." "Enola Gay" was the first and only single from the band's sophomore album, Organisation (1980). Some fans apparently thought the song was a coded message that the band members were gay. But that's a misunderstanding. In fact, "Enola Gay" might very well be "the prettiest ever song about an atomic bomber," especially for an anti-war song. And for this week, I've selected three versions of it. You can check them out after the jump.

Flashback #1: "Enola Gay, you should have stayed at home yesterday."

This is the music video for the original single version of "Enola Gay" from 1980.

Flashback #2: "We still close our gigs with Enola Gay, leaving the stage with the drum machine playing."

Flashback #3: How about we finish off this week's post with an extended remix of "Enola Gay"?