So while I was away on vacation awhile ago I actually read a book. A whole book. Front to back. Those who know me know this a rarity. I have a pile of books as tall as me to read but I just never choose them. But I was determined. My mother and sister both read this book and liked it and Alzheimer's is quite close to my life, so it was probably destined that I would read it. 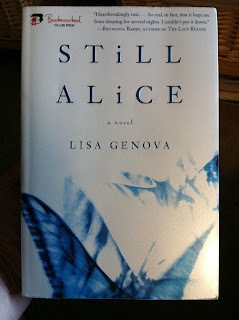 Alice is a middle aged, professor with 3 children and a loving husband. She notices some small changes in her memory as the book starts. It all seems nondescript except that we, the reader, know where we are headed. Her problem comes to the forefront when she goes out for a run in her neighborhood, where she has run for years, and she can't remember how to get home. This section is written to show how terrified Alice is and we, the reader, feel it. I am pretty sure my breathing became shallow and my heart was pounding.

Alice decides she needs to see her doctor. After discussing all options as to what is going on, Alice chooses to see a neurologist. It is at this appointment that all she fears comes true. Alice is definitely having a memory problem that needs to be tested. After testing they confirm she has early onset Alzheimer's. She has the markers and her children should be tested to see if they are also carrying the marker for early onset Alzheimer's. It was at this point in the book when I realized that I know some people in my life that should have this blood test to look for the markers - if they so choose.

We all know what's coming next but I have to tell you, reading it was heart breaking. The first time she doesn't recognize her daughter I just burst out crying. Then when she can't remember that she needs to go to the bathroom, I was just as embarrassed as she was. Alice is strong but there is no strength to beat Alzheimer's. They try a clinical trial (fake trial in the book) but it does not work. Then we find out that Alice most likely started her onset waaaaay earlier than anyone thought. So medicine and any clinical studies were actually not going to help.

The most amazing part of the book though is when Alice is fully ensconced in Alzheimer's but she creates a support group for other patients. She is determined to be as normal as possible. She then gives a speech about early onset Alzheimer's and I could hardly get through this section. Her mind is fully there, she has things to say, she has opinions, she has feelings but Alzheimer's just keeps taking it all away.

I am grateful that the book does not end with her death or even with a sad ending per say. Obviously having Alzheimer's is sad but by the end of the book Alice doesn't seem sad. She seems stronger than ever. One can only hope to be as powerful as Alice with or without Alzheimer's.

Overall I am torn on the book but perhaps not for the reasons you think. The book is amazing but is it awful at the same time. It is so well written that you are in Alice's head and feeling the terror she is feeling. You feel like you are losing your mind when you read some sections but just like Alzheimer's does, you don't know it. So this terrible feeling is just because the book is written so well.

I highly recommend this book for anyone who has Alzheimer's in their life. It gives you such a different perspective and teaches you to not forget (no pun intended) that Alzheimer's patients are still viable human beings with feelings and lives.