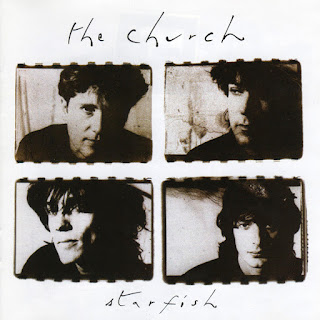 [Alternative Religion] -- Time to take all y'all to church. Or, rather, The Church. You see, on February 16, 1988 -- thirty years ago today! -- these Australian rockers released their fifth studio album, Starfish. Although they had four other records to their credit (I nearly forgot about three of them before I wrote this post), this was the first one that made Americans take notice. And, boy, did we notice it over here. Starfish went gold in the US, launched a big hit single, and two of its songs were featured on that 80s television phenomenon, Miami Vice. The Church never equaled the success of this record, though they released new music fairly consistently up through 2017. It's a nod to the fact that most one-hit wonders have quite the catalog of music, much of it known only to their most fervent fans. Well, come on in. The Church service is about to begin. What are our hymns this week? Read and hear more after the break.

Flashback #1: "I see you slither away with your skin and your tail."

"Reptile" was the second single off Starfish, and it peaked at #27 on the US Hot Mainstream Rock Tracks. What it lacked in sales or chart success, it over-achieved in critical reception. The driving pulse, great guitar hook, and stylistic lyrics all combine to make a tune that seems tailor-made to follow "Milky Way" into the stratosphere. However, I'm not certain when I last heard this punchy ditty on the radio. And that's a shame. I mean, how many songs have a strange ability to almost you feel like being called a reptile is a beautiful thing?

Flashback #2: "No repairs are needed, just a spark."

"Spark," which kicks off the second side (if you had the cassette or LP), is a tight little rocker. It wasn't a single, but it's yet another example of an 80s band channeling a little rock spirit from the 60s.

Flashback #3: "Wish I knew what you were looking for | Might have known what you would find."

I know, I know. This is the reason you clicked through. When you saw this week's post was about The Church, you probably heard the jangly opening of "Under the Milky Way" and couldn't wait to reacquaint yourself with it. Not that the song has ever been lost. It's been in nearly constant rotation since its heyday in early 1988. It peaked at #24 and #2 on the US Billboard Hot 100 and Mainstream Rock Tracks respectively. And maybe it's just me, but the lyrics still feel just as mysterious as when I first heard them ("Wish I knew what you were looking for" ... seriously, what are we looking for?).