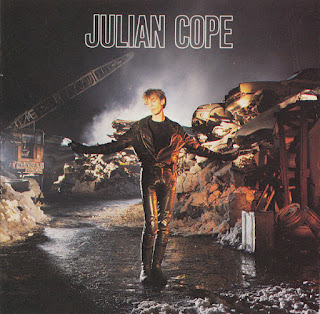 [Saint Julian] -- I discovered Julian Cope in 1987. By that time, he had released two albums with his second band, The Teardrop Explodes (1978-1982), and three solo albums. That third solo album, Saint Julian, was released in March of 1987. Given my crash course in Cope's musical output, I can say Saint Julian was the most directly rock'n'roll record that Cope had recorded up to that point, his previous ventures being more of the neo-psychedelic vein. In keeping with the new musical attitude, Cope even tried to embrace the role of an 80s rocker, wearing leathers and adopting the arrogant posture of a "Rock God." And as much as I enjoyed my brief exposure to the earlier material, Saint Julian record reached me on several levels the other records didn't. I'm not saying it was deeper than his prior work, but I do feel it was better crafted. Or, maybe, I just think it was better because it resonated so much with my gut. If you would like to sample this 31-year-old record, then read and hear more after the jump.

Flashback #1: "I can't believe you're trampling me."

"Trampoline" was the second single off Saint Julian. It didn't chart in the US, but it did reach #22 on the UK Singles Chart. And there's even a music video for it. Speaking of which, I do dig the band's use of a turntable stage. It kind of mirrors the cyclic heartbreak felt by the song's protagonist.

Flashback #2: "We were all shot down from heaven above."

"Shot Down" wasn't a single, but it's a great showcase for Cope's swaggering and pounding rock'n'roll attitude at this point in his career.

Flashback #3: "Put your head back in the clouds and shut your mouth."

Swirling guitars, a strait-ahead drum beat, and an English accent gently snarling that the world should shut its mouth ... "World Shut Your Mouth" was tailor-made for 1987. The first single off Saint Julian, "World Shut Your Mouth" definitely propelled that record's success by generating some of its own. It peaked at #19 on the UK Singles Chart, #84 on the US Billboard Hot 100, and #22 on the US Billboard Mainstream Rock Tracks. It was even listed in the top 40 of NME's Singles of the Year for 1986 (this song was released in September 1986, several months in advance of the album). If that wasn't enough to make Cope's critics shut their collective mouths, it should have been.