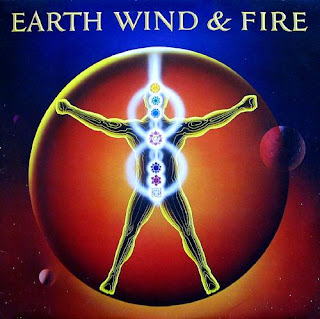 [The Power (Light) of Earth, Wind & Fire] -- I don't know if the kids these days remember, or even know, but back in the 70s and early 80s, there was a little band called Earth, Wind & Fire (EWF). Now, this little band wasn't really so little. I mean, here is the personnel listing for their eponymous 1971 debut album, and here is the list for their 1983 album, Powerlight. Building from a funk foundation, they blended R&B, soul, jazz, disco, and even early electronica among other musical styles into a force to be reckoned with. And they had a horn section, The Phenix Horns, that was the envy of the industry. For example, after catching EWF on tour, Phil Collins brought The Phenix Horns in for several Genesis and even solo tracks. Speaking of EWF on tour, they were known for elaborate stage shows. I remember Earth, Wind & Fire in Concert, a 1984 TV movie that showed their Oakland Coliseum concert which had been filmed in December 1981. During the performance of "Jupiter" (the song starts around the 47:50 mark in this video), they staged a battle with an evil Darth Vaderish entity. I don't think that video is quite the same show I watched, but you'll get the idea. Anyway, in February 1983, EWF released their 12th studio album, Powerlight. The record buying public responded powerfully, lifting the album to #4 and #12 on the US Hot Black Albums and the US Top LPs & Tape charts respectively.

Flashback #1: "I would build you up, never let you down | If you fall in love with me."

"The Speed of Love" wasn't released as a single, but it is burned into my music memory because it was the first track on side B of the Powerlight cassette I owned.

"Spread Your Love" was the third and final single released off Powerlight, hitting the airwaves in June of 1983. It peaked at #57 on the US Black Singles chart, but it really deserved a wider audience. And I'd say it's message (Human love is damn serious ) is sorely needed today as well.