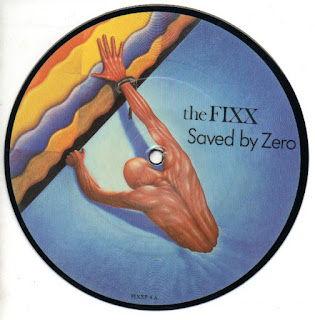 [Saved by Zero] -- In 1983, one thing led to another and I was treated to the new wavers known as The Fixx when their second studio album, Reach the Beach, came into my possession. OK, technically, it was the first single off that album that introduced me to the band, and I heard it on the radio before I owned it, but I did quickly pickup the LP so I could hear more. I'm not certain how I had missed their debut album -- probably something to do with the deficiency of radio in a small, isolated town. Anyway, this record has ringing guitar hooks and "cool, robotic slices of synth pop"[AllMusic.com review]. It's quite a time capsule of early to mid-80s melding of pop music and technology. To this day, it remains one of my favorite records. To find out why, and to see if you agree with me, read and hear more after the jump.

Flashback #1: "You've got a blank face, which irritates | Communicate, pull out your party piece."

"One Thing Leads to Another" is the ultimate runway song. And I'm not just saying that because Fixx lead singer, Cy Curnin, had a brief stint as a designer hat maker. Oh, and it peaked at #4 on the US Billboard Hot 100 in November 1983.

Flashback #2: "Chasing after my dreams; disown me, loaded with danger."

Haunting, yet somehow soothing, and with vaguely reassuring lyrics, "Saved By Zero" was the second single released off Reach the Beach. I've never been able to nail down what the song is about, but it has been described as having "acutely captured the paranoia of the Cold War in fearful lyrics." Whatever it's about, I can listen to it on repeat. And I can even take in repeated viewings of the music video.

Flashback #3: "Oh, I can see myself running | But I'm standing still."

"Running" wasn't a single, but I love it. So, even though it doesn't have an official music video, it is out third and final Flashback of the day. And for all the nightmare scenarios described in the lyrics, it's quite a danceable tune!