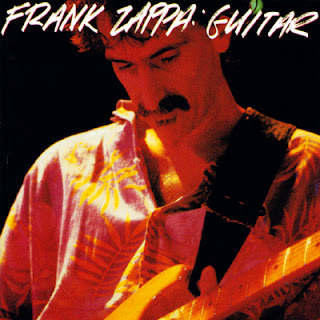 [Guitar] -- In 1988, Frank Zappa released Guitar, a double CD featuring his guitar solos recorded during his live performances between 1979 and 1984. It was a follow-up to his 1981 album, Shut Up 'n Play Yer Guitar. The 1988 collection earned Zappa his sixth Grammy nomination, this time for "Best Rock Instrumental Performance." He lost to Carlos Santana's Blues For Salvador. The CD release of Guitar had 32 tracks and only one of them, "Sexual Harassment in the Workplace," was released as a single. So, instead of picking my usual three tunes to share with you, I'm embedding the entire playlist for your enjoyment! (Right after the jump.)

For performer credits on each track, refer to this Discogs listing.