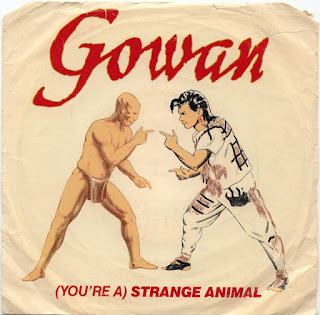 [You're a Strange Animal] -- I seem to recall "A Criminal Mind" being a big radio hit in the US. Though my research today tells me otherwise. The song was certainly instrumental in scoring Lawrence Gowan, recording and performing under his surname, a slew of award nominations and top ten hits in his native Canada. But it doesn't seem to have even charted in the US. Anyway, "A Criminal Mind" was the second single off Gowan's second studio album, Strange Animal (1985). That record was also Gowan's first album release in the US. As I type this post, I don't remember how I ended up first hearing "A Criminal Mind," and digging, in the Spring of 1985. It's possible I caught the song's music video on some late night music program, but that's not my recollection. I do have a distinct memory of being awestruck over the confessional lyrics and stark instrumentation of "A Criminal Mind" as it wafted over my transistor radio. And it wasn't until the fall of 1986, at Penn State, that I heard the rest of the album. One of my dormmates was loudly playing his cassette copy of Strange Animal, and I followed my ear until I found the source. He was psyched to know of another Gowan fan, which I immediately became after hearing more of the man's songs. So, this weekend, we'll explore several of my favorite tracks from this record. If you'd like to know them, read and hear more after the jump.

Flashback #1: "[B]eing brought to justice | That was my only crime."

Here it is, the song that first introduced me to the chilling yet appealing voice of Lawrence Gowan: "A Criminal Mind" is our first flashback!

Flashback #3: "Six long months in a foreign wasteland | Scenes of terror so fresh and ripe | Found a place to come face to face | Like the gutter-snipes."

The fourth and last single off Strange Animal, "Guerilla Soldier" is Gowan's musings on US military intervention in the Caribbean. At least, I think it is. It could be more broadly a meditation on conflicts between professional soldiers and homegrown fighters. The light vocals and grinding pop rock belie the serious subject matter of the song. And I can't help but sing along as Gowan croons about the "Big Red Machine ... patrolling the jungle." After 30+ years, this tune might ring hollow or corny to younger ears, but I still love it.

Flashback #3: "Watching your moves | They look so radical | Hearing your words | They sound fanatical."

"(You're a) Strange Animal" is sort of the title track to Strange Animal. It was the record's second single, and it remains probably my favorite song by Gowan. The music video, though perhaps quaint by today's standards, was nominated for a Best Video award (specifically for the animation). I'll admit that much of the music video makes me squirm uncomfortably (or just snicker) upon a rewatch today, and I wonder how Gowan kept a straight face through it. But I will never be embarrassed over my love for this song. Sure, the lyrics that pretty much equate the object of the singer's desire to a hunted animal or nearly alien creature, but dig that straight ahead 80s rock, man. O Ominous Spiritus, indeed!


Bonus Flashback: "There's something to be said | For the sweating palm | There's nothing like the high | From a ticking bomb."

"Keep the Tension On" wasn't released as a single. But it still ranks among my top five songs from Strange Animal. And upon a fresh listen today, I find the song's imagery seems remains oddly appropriate and maybe even prescient.