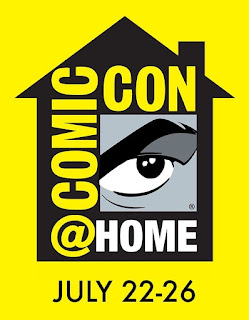 [Comics and SDCC!] -- I was, of course, planning to be in San Diego for San Diego Comic-Con (SDCC) this week. And this would have been the 10th SDCC in a row that @dangrdafne and I attended! But then, the COVID-19 pandemic claimed the convention in its wake of cancelations. So, this venerable Nerdhalla, which celebrated its 50th anniversary last year, conducts its first-ever virtual convention in 2020. If you are unfamiliar with the event, here's some background: It was founded in 1970 as the Golden State Comic Book Convention. As it grew, this convention was later rebranded with the name we have come to know and recognize. SDCC bounced around to several locations in San Diego until it landed at the San Diego Convention Center where it has been held since 1991. SDCC is now widely recognized as a juggernaut of TV and film events. So much so that critics regularly complain it's "not about comics anymore!" However, there is still plenty of comic book related activity at SDCC, as Comic Spectrum pointed out in 2018 and in 2016.

Last year, to celebrate SDCC, I selected several 80s tunes inspired by, or about, comic books. There were several tracks that did not make that list, so I'm using them this year. What made the latest playlist? Read and hear more the jump.

"Flash" is the theme song of the 1980 film Flash Gordon. I'm relatively certain that most Comic-Con attendees know him from this movie, or at least Queen's movie soundtrack. I mean, it is arguably one of the best soundtrack albums of all time. But, the character of Flash Gordon has a long history in media, including comics! Still, we can all sit back and enjoy the "Flash" theme.

XTC is no stranger to the Flashback, having appeared on the April 8, 2011, edition (Rain Over Me) with a song from Skylarking. As I did back in April, I selected a track that was not released as a single. For this week, our second flashback tune is "That's Really Super, Supergirl." This isn't the only song about DC Comics' Supergirl, who first appeared in Action Comics #252 in 1959, but it is one of the only two such songs I found from the 80s. And, in typical XTC fashion, it's a wonderful, almost bouncy, "It's not me, it's you" kind of song. And for those who like more backstory, XTC singer/guitarist Andy Partridge discusses the song over at the XTC Fan's blog.

"Surfing with the Alien" was the title track, and first single, off the second studio album by guitarist Joe Satriani. The comic book connection here is the titular alien of the track: Marvel's Silver Surfer, who also appears on the album cover! And, yes, this John Byrne artwork (from a Silver Surfer #1 panel) was officially licensed from the publisher. I'm embedding a video that features the artwork below, but you should also check out a video of Satriani performing live in 1989.