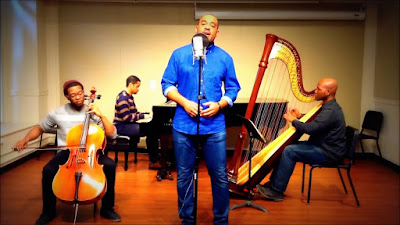 [Serendip Covers] -- Earlier this week, I discovered the four-piece ensemble known as Sons of Serendip. They were set to be featured guests in an upcoming webinar, and the email invite linked to the group's cover of "Bridge Over Troubled Water." I liked it. I looked for more of their music. And I might have become a little obsessed with them. Now, Sons of Serendip are not an 80s band -- this classical crossover ensemble has been active since about 2014. But while looking into their catalog, I quickly found that they had covered at least one 80s tune. Where there's one 80s cover, there could be more, right? Right! You can read more about how Kendall Ramseur (cellist), Cordaro Rodriguez (pianist), Mason Morton (harpist), and Micah Christian (lead vocalist) came together while in graduate school at Boston University by visiting their webpage. To find out which of their covers I've highlighted this week, you can read and hear more after the jump.

Flashback #1: "I only wanted to see you  | Laughing in the purple rain."

Prince released his sixth studio album (and movie soundtrack), Purple Rain, in 1984. On April 23, 2016, two days after Prince's death, Sons of Serendip posted this cover of the title track as their tribute to the creative genius and cultural icon. This is the song that led to my quest to see if Sons of Serendip had more 80s covers so I could feature them this week.

In 1984, Cyndi Lauper released the second song off her debut album, She's So Unusual, and saw it shoot to #1 on the US Billboard Hot 100 chart. It held that position for two weeks and is still ranked among her most commercially successful singles. A classic of 80s pop music, "Time After Time" has been covered by a wide variety of artists. In June 2017, Sons of Serendip covered it by request.

Flashback #3: "Whenever I'm alone with you | You make me feel like I am home again."

"Lovesong" was the third single from The Cure's eighth studio album, Disintegration (1989). In the US, it peaked at #2 and remains the band's only top-ten entry on the Billboard Hot 100. In March of 2015, Sons of Serendip posted their plaintive and etherial cover.