I do not have a word to describe Watchmen from HBO that describes how completely incredible it is. 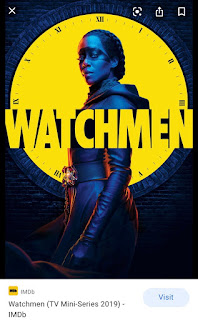 Each actor is perfectly chosen for each character, the cinematography is stunning and overwhelming,
the music (both score and soundtrack) is superb and it’s own character, the sound effects appear old fashioned but they are powerful and real, and the story is beyond belief .... except that it all did happen and is happening. Well maybe not the actual sci-fi parts but the historical stories are all real and horrifying.

Regina King is a goddess and is my new favorite hero.... errrr superhero??

I am so grateful that HBO offered this to watch for free this past Juneteenth weekend. It was a timely watch and was terrifyingly true for our times right now. I learned so much from the nine episodes. What an amazing undertaking and accomplishment those 9 episodes are.

Brainwise and I had many interesting conversations after each episode after the credits and music played, except one episode had an after credit scene - be sure to watch the credits and listen to the songs that play, they mean just as much to the story as the actual script. There were many pieces to discuss and pull apart and mull over both internally and together. I feel that this is a show many people should watch to learn about racism and our society. It might help people understand it in a different way and actually listen to what is being said if it is shown to them in this comic book way.

I had a hard time at times remembering that this was sci-fi as the historical topics and human elements were so accurate and real. And there were some incredibly far out there sci-fi elements but if you know the Watchmen story, you should have no issue following along - I got lost a few times but it all worked out in the end and had me nodding and smiling at how it all tied together.

I would love to get into everything on this post but I want you to go and watch, if you haven't already, and be as horrified, amused, shocked, intrigued and delighted as I was with this show.

As humans we need to do better and the Watchmen is just one way to show us how to try.