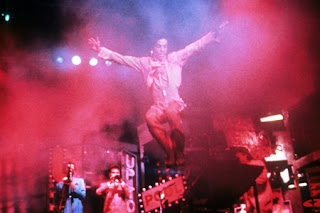 [LIVE Signs] -- First things first: I will agree to disagree with just about anyone regarding the status of Prince's 1987 double studio LP, Sign 'O' the Times. The album has many staunch defenders, but I feel it could have been better with some judicious editing (i.e., pruning it back to a single platter would have more effectively showcased Prince's genius). That's simply a matter of personal preference, really. But whatever one thinks of the studio release, and whatever you think of me for my opinion, we can probably agree that the concert film released that same year is a tour de force. It wasn't exactly a box office success, but VHS sales the following year propelled its popularity and fueled many positive reviews. SKY Magazine even suggested that it "was the greatest concert movie ever made" (Wikipedia entry without citation).

Twelve of the thirteen songs are live, on stage performances; "U Got the Look" is actually a promo video.

And this week's Flashback? It's the entire concert film courtesy of YouTube:

Flashback: "If  you go to only one concert this year. The Prince movie is the one!"