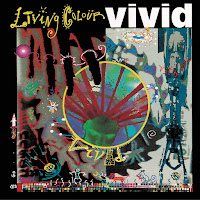 [Still Vivid] -- Highlighting more artists of color this week on the Flashback. Over 30 years ago last month, Living Colour burst onto the airwaves with their debut album, Vivid (1988). The novelty of Living Colour being an "all-black heavy metal band" (as quoted in nearly every post about them) probably helped them in the attention department. And while heavy metal was probably too one-dimensional a descriptor for Living Colour's sound, once they had your attention, for whatever reason, their music held it.


You can probably guess one of Vivid's tracks to make this week's selections. But what about the other two? Read and hear more after the jump.

Flashback #1: "I know your anger, I know your dreams | I've been everything you want to be."

"Cult of Personality" was the first single off Living Colour's debut album, Vivid (1988). This funk-metal tune all but leapt out of radio speakers and grabbed hold of the record-buying public. "Cult of Personality" roared up the charts, hitting #13 on the Billboard Hot 100 and #9 on the Mainstream Rock Tracks charts. Living Colour nabbed an MTV Music Award as Best New Artist (1989) and "Cult of Personality" won them a Grammy for Best Hard Rock Performance (1990). And this song still resonates today what with all the facades of manufactured political/celebrity personalities.

"Open Letter (To a Landlord)" was the third single off Vivid. It peaked at #82 and #11 on the Billboard Hot 100 and the U.S. Mainstream Rock charts respectively. With calls for rent cancellation/forgiveness in the wake of the COVID-19 pandemic, and with the increased focus on BIPOC neighborhoods in the wake of (finally) rising awareness of social injustices in this nation, this song might be ripe for revisiting with renewed relevance today.

"Which Way to America?" was the last track on Vivid, and it was never released as a single. But as a song highlighting the incredible chasm between white and BIPOC's experiences of America, it unfortunately remains relevant today. In 2020, there are still far too many saying, "I just want to know which way do I go to get to your America." There is no official music video for "Which Way to America?", so I'm embedding a more recent performance by the band. I just felt it was the best representation (and it's a high quality video). If you want something more along the lines of a time capsule, I point you to either this 1990 live performance or this 1989 appearance on the Arsenio Hall Show.