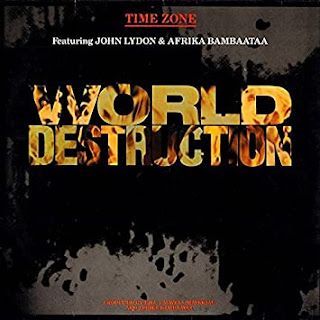 Flashback: "This is a world destruction, your life ain't nothing."

When I reflect upon the state of the world this very week, I still find this particular song to be a prescient choice. On paper, the collaboration called Time Zone just shouldn't work. The lead singer of the Sex Pistols teaming with a founding member of a Bronx street gang? Ridiculous! A punk rock icon with a pioneer of hip-hop? Blasphemy! Ah, but in the studio, it was like capturing the proverbial lightning in a bottle! "World Destruction" (and its many remixes) conveyed the energy and angst of a generation coming out from under the clouds of the cold war, but still very aware of their conflict-ridden world. All these years later, it still strikes chord with me.

Here is a Video Re-Tracked version: