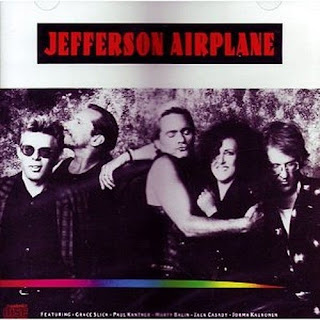 [Jefferson Tuna] -- This week in 1989, thirty years ago, Jefferson Airplane released their eighth and final studio album, Jefferson Airplane. There can be some confusion surrounding the whole Jefferson Airplane, Jefferson Starship, and Starship details, particularly in terms of who was in which band at which time and who owned what. Even here, vocalist Grace Slick had left the 80s rock band Starship, and a few other folks had been recording/touring as the KBC Band or as Hot Tuna. And I think that pretty much shows in the final project which ends up sounding closer to Hot Tuna (sort of?) than anything previously identifiable as Jefferson Airplane. Rolling Stone equated this reunion record with watching your favorite ballplayers trying to play well past their prime. Maybe there's something to that description. Anyway, there were three singles from this record, which itself peaked at 85 on the album chart (Billboard Hot 200P). Only two of the three singles charted, and only two received the music video treatment. Do you remember any of them? I have to admit that I didn't. But, as usual, you can read and hear more after the jump.

Flashback #1: "Ready to touch the stars again, Ready to go back to school."

"Planes" was the second single off this album, but the first to receive the music video treatment. And even by late 80s standards, the video is a collection of tropes set amidst "live" band footage and aerospace clips. But if you're an aerospace enthusiast and need an anthem, this is it.

Flashback #2: "The Summer Of Love was something special."

"The Summer of Love" was Jefferson Airplane's first single off this eponymous record. It reached #15 on the Adult Contemporary chart, which seems just about appropriate for a 1989 song looking back and praising 1967, but without any of the actual feeling or even sound of that year. Also somewhat appropriate: No music video. Now, this isn't a bad tune. It's a fairly well done lament. It just doesn't really get to the heart.

Flashback #3: "But our hearts will decide | When you find true love."

The third and last single off Jefferson Airplane, "True Love" got a music video but went nowhere on the charts. It's a serviceable song with a decent message (our hearts will decide what true love is and when we find it). This song seems a bit better constructed, and that might be due to the songwriting team of Steve Porcaro and David Paich from Toto. The music video for "True Love" features the band as something of a three ring circus. Is that just 80s video 101, or is it a metaphor for the circus many people go through on the way to eventually finding true love? Well, I'm not sure because I'm still trying to figure out why Grace Slick is part of this circus as ... a nun? Wait, what?