Personally I have no idea why people are not liking this movie. But then I am not a die hard Star Wars fan. I can watch the movie for what is it and not what some expectation of what it “should” be is. 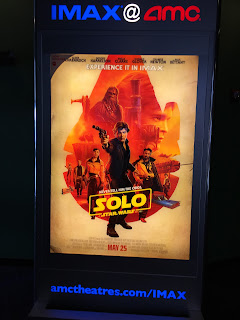 I thought Alden Ehrenreich was perfect as a young Han. I loved his innocence and how you can watch him learn to get stronger, smarter and tougher. It was nice to see the happier side of Han Solo for awhile too.

I was definitely not on board with Woody Harrelson before the movie but I am definitely on board after. I worried that because he was so famous that he would overshadow everyone but that’s not giving Woody’s acting the credit is deserves. He did not overshadow anyone and in actuality his presence brought a much needed grounding to Han and the story. He was portraying the more knowledgeable character and having the “famous” person portraying that role worked perfectly.

Thandie Newton was incredible. Gone waaay too soon in the movie but she was an integral part of the story. I loved watching her learn to like Han and to trust him. Again it was fun watching the more seasoned performer helping out the newbie and the newbie growing and learning from them.

The origin story of Chewbacca and Han meeting was awesome. I don’t know the actual canon story but this was perfect. And talking in Wookie?? Awesome! I actually started to think I could understand it by the end of the movie.

L3 - the droid - was hilarious and her back story leads to a major plot point of the movie. I recently saw the actress who portrayed L3, Phoebe Waller-Bridge, on the Graham Norton show and not only do I now have a girl crush on her but she was just perfect for L3. My favorite part of her story was that when she went to audition for the role she had never seen any Star Wars at all and didn’t know what a droid was. Skip to seeing her in the movie... I would never had guessed she didn’t know what a droid was or that she didn’t know Star Wars. She fit in perfectly and she was hilarious!

Donald Glover as Lando was perfect casting. Exactly what I would think a young Lando would be like and he played perfectly off Han. Emilia Clarke was also great but when the movie ended I had to ask my friend, a Star Wars aficionado, if Q’ira exists or not in the Star Wars world and she said no. But apparently Q’ira might be around in the newest world of Star Wars.

A major point to make about the movie, is that during a major action scene myself and my two friends were pushed back in our seats, holding onto our arm rests, hearts pounding... even though 1) one of us had already seen the movie and 2) we knew the outcome of the scene. It has to be a good movie if we react like that under these two circumstances for sure.

Overall, the movie was a heist movie in outer space and it was perfect. Please don’t listen to the naysayers. Go see the movie and make your own decision. Just enjoy the story and the fun.