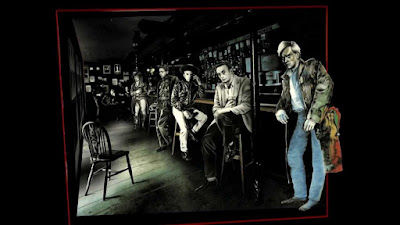 [Clutching at the 80s] -- This week in 1987, 80s prog rockers and cult darlings, Marillion, released their fourth studio album, Clutching at Straws. Marillion got their start in Aylesbury, England, in 1979, and took their name from J.R.R. Tolkien's novel, The Silmarillion. A favorite among the D&D playing teens in the early 80s, Marillion reached the peak of their success with Clutching at Straws' predecessor, the concept album Misplaced Childhood (1985). While not as commercially successful as Childhood, Straws did reach #2 on the UK Albums Chart and it received many positive reviews. In fact, AllMusic.com considers this album to be their "most unheralded masterpiece." It was certainly a transitional record -- it was the last record with singer-songwriter, Fish, and it heralded guitarist Steve Rothery's ascension to being the band's new musical instigator later recordings.

Like Childhood, Straws is a concept album. However, rather than delving into the vagaries of youth, this record looks the downward spiral of a young adult. In these songs, we see Torch, who is 29 years old and out-of-work. His life is a mess and he seeks solace mainly in alcohol. It is not a happy story, as Torch ends up a raging drunk beyond all hope of redemption.

The three singles released from Clutching at Straws were "Incommunicado," "Sugar Mice," and "Warm Wet Circles." However, since we're dealing with a concept album, I thought it might be best to provide a full playlist rather than just pick my usual three selections. Enjoy!

Flashback(s): "I'm a citizen of Legoland travellin' incommunicado  |  And I don't give a damn for the Fleet Street aficionados." (lyrics from the first single, Incommunicado).