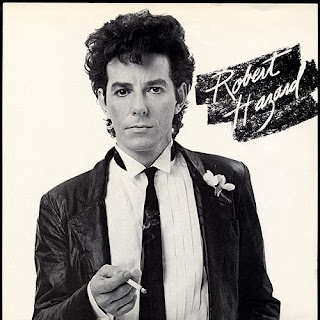 [Escalator of Life] -- Some songs are perfect time capsules of time and place. It doesn't matter when such a song hits your ear again, you are mentally transported back to that moment you first encountered it. A perfect example of this happened during my morning commute earlier this week. The opening keyboard strains of "Escalator of Life" came on the radio and I was no longer driving down 309 for my dayjob. No, in my mind, it was 1986 and I was sitting in a dorm room at University Park. RTP, who had just dropped my turntable's needle onto a new-to-me record, looked at me and said, "I think you're going to like this." That was my introduction to Robert Hazard and his 1982 eponymous debut EP. I would later acquire my own copy of this record, which is still in my collection. I would also later learn that Hazard's most famous song was "Girls Just Want to Have Fun," which he wrote and recorded in 1979 but never released. No, he was waiting for the right person to release it, and that person was Cyndi Lauper who made it a #2 song in 1983. Anyway, Hazard released a total of seven records between 1982 and 2007. His later records veered away from his initial new wave sound in favor of a more contemporary singer/songwriter, almost folky, vibe. I even got to see him perform at the Sellersville Theater during this latter stage of his career. We lost him shortly after that tour; he passed away in August, 2008, just shy of his 60th birthday. But this post is about Hazard's first EP in all its 80s glory. And you can revisit some tracks with me after the jump.

Flashback #1: "We're riding on the escalator of life |We're shopping in the human mall."

"Escalator of Life" never cracked the top 40. It peaked at #58 on the Billboard Hot 100, and spent a total of 9 weeks on the charts. But this is probably Hazard's most recognizable song, at least when you get to its chorus. And what it lacked in national prestige, it more than made up for as an iconic song of 80s Philadelphia (or so I am told).

C'mon, admit it. You wish you had thought of replacing "chain reaction" with "change reaction" like Robert Hazard did in this song. Only, you didn't. But you can't feel too bad: "Change Reaction" didn't really chart, and you're still a domino. (Just listen to the song lyrics.)

Flashback #3: "How many roads must a man walk down | Before you call him a man?"

It's no secret that I admire Bob Dylan as a lyricist, but I dislike his voice. I can usually enjoy his songs only when someone else sings them. Yes, this is tantamount to blasphemy for some folks, but that's the way it is. So, I end this week's playlist with Robert Hazard's cover of Dylan's "Blowin' In The Wind." This was the final track on Hazard's debut EP. I probably could have found a cleaner (read: sterile) version of this track. But the crackle of vinyl in this recording adds just the right amount of nostalgia. Yeah, this is pretty much the way I would have heard and loved this song back in '86.