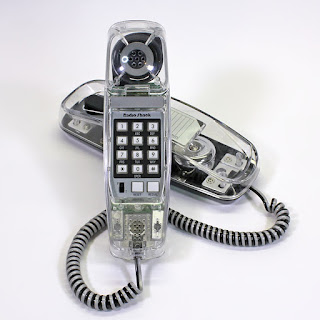 [Telephone Calls] -- I heard Tommy Tutone's 1981 hit, “867-5309/Jenny,” in the cafeteria yesterday. Every time I hear a song about using the phone, I think about the fact that kids these days don't share an anxiety that was familiar to me and my classmates: The fear of calling someone, but accidentally reaching their parent or guardian instead. Of course, these days, kids use their phones -- cell phones -- to text, Tweet, email, and do just about anything other than making phone calls. Still, I got to thinking of all the great 70s and 80s songs about calling, or trying to call, someone on the phone. The aforementioned “867-5309/Jenny" and Blondie's "Call Me" are too obvious to make this week's playlist. But I did find three fine examples for you. So, if you want to know what three 80s tracks are worth calling home about this week, you can read and hear more after the jump.

Flashback #1: "Gotta get the operator make a telephone call."

Let's kick things off with a "Bad Connection." That is, the song by Yaz(oo). In 1982, Yazoo (or Yaz as they were known in the US and Canada) released their debut album, Upstairs at Eric's. It did pretty well, particularly with club remixes. I didn't know about the record until around the fall of 1986. But I immediately fell in love with the band. And I still own both of their studio albums in vinyl. "Bad Connection" may never have been released as a single, but it could almost be relevant today, what with dead cellular zones.

Flashback #2: "How do you say you're OK to an answering machine?"

From Let it Be (1984), The Replacements' third studio album, here is "Answering Machine." Sure, this tune wasn't a single. But that hardly disqualifies it. And, my gods, is it full of gut-wrenching emotion and tasty guitar licks.

Flashback #3: "I give you my affection and I give you my time | Trying to get a connection on the telephone line."

The German band, Kraftwerk, released "The Telephone Call" (or "Der Telefon-Anruf") in February 1987. It was the second single off their ninth studio album, Electric Café (1986). This tune was the band's second #1 hit on the Billboard Hot Dance Club Play chart.


Image note: If you're curious about the Radio Shack Clear See-Through Corded Telephone that graces this post, click over to Adafruit's August 2015 post: Look at this 1980s Radio Shack phone.
Posted by Brainwise at 6/29/2018 11:00:00 AM