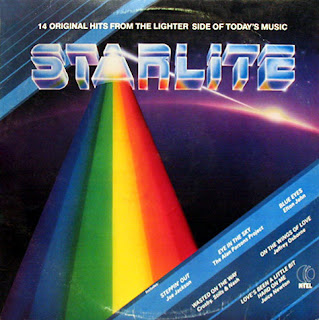 [STARLITE] -- A friend recently posted a link to The Story Behind Joe Jackson's "Steppin' Out" (WSJ). Depending on the source, "Steppin' Out" was released in either June or August of 1982. It spent a total of 27 weeks on the Billboard Hot 100, peaking at #6 on December 11, 1982. It also peaked at #5 in Cash Box magazine, #4 on Billboard's Adult Contemporary chart, and #7 on Billboard's Album Rock Tracks. In short, it was Jackson's biggest US hit. Now, I'm sure I heard "Steppin' Out" on the radio in 1982. However, my clearest memory of the song is as the lead track off STARLITE, a 1983 compilation record from K-Tel. If you watched TV in the 70s and 80s, you probably remember commercials for K-Tel's records and other products. A vinyl copy of STARLITE boasts a retail value of about $2.00 these days, and it features a track list of 14 songs:


All the songs were top 40 hits on the Billboard Hot 100, and half of them reached top 10 status. Yeah, there are a few oddballs on there, like "On The Wings of Love" or "A Penny For your Thoughts," but it's a pretty solid lineup. And while STARLITE harbors no true, straight-ahead rockers, it is kind of a diverse collection of music (as far as 80s top 40 music goes). So, rather than choose my usual trinity of tracks, this week's Flashback is featuring the entire compilation. Enjoy!