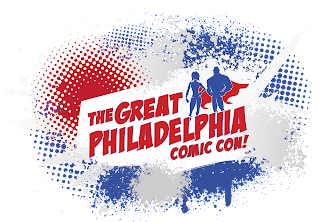 Dangrdafne already posted the basics about the Great Philadelphia Comic Con 2018. So I refer you to that post to see an overview of the con itself and pics of some art we picked up. She has, however, left it to me to talk about the comic book aspect of our venture on Saturday, 4/28/2018.

Several weeks prior to the con, I identified the comic creators I wanted to meet and also determined what books I would like them to sign. I'll provide details below. Now, some of the comics I wanted to have signed were already in my collection. Unfortunately, I couldn't find my copies of The Steranko History of Comics Vol 1 and Vol 2, or even access some of my older issues still in storage. So, I had to acquire other books to fill the gaps. Fortunately, with help from a my local shops and a few judicious eBay purchases, I was pretty much set for the convention.

Jim Steranko's table was my first stop, and I had six of his books ranging from 1967 to 1973, all found at a shop near my office. They were:

He was more than happy to sign them (for a nominal fee, of course). But I didn't mind. He was classy, bigger than life, and oh, so cool to chat comics history with. Speaking of comics history. Remember I said I couldn't find my copies of The Steranko History of Comics? Turns out, Jim had pulled a stack of copies of Volume 1 back in the day. And he had them with him at the con. These were not reprints. They were first edition copies and they were in beautiful shape! So, naturally, I purchased one and had the man himself sign the title page:

And here he is signing some of my other books:

Then we made a brief stop at James O'Barr's table. James is, of course, known for creating The Crow. That first book has become a franchise in both comics and film (four feature films and a TV series). As I mentioned above, I could not access any of my previously purchased Crow books. However, I did find a copy of A Caliber Christmas #1. O'Barr contributed a story and he did the book's cover. Plus, it is a great addition to my collection of "holiday" themed comics. He signed the book very quickly, so we didn't have much time to talk.


Next up, I went looking for Trevor Von Eeden. Trevor is known for co-designing the look of Black Lightning and drawing that first series (Black Lightning Vol 1. #1-11). That's how he was billed for the con, and I did have copies of Black Lightning #1 and #2 for him to sign. But he was definitely more excited that I knew Batman Annual #8 was the book he is most proud of in his 25 year DC Comics career. He drew every page and he painted the cover. From an interview: "I was able to ink it myself, and also got my girlfriend at the time, Lynn Varley, to color it – her first job in comics.” Yes, that Lynn Varley. While at his table, Trevor spoke about his involvement in Graphic Classics, Vol. 22: African-American Classics. Of course, I had to buy a copy from him and have him sign that, too.

If you know me, you know I'm a Star Trek fan. And J.K. Woodward, the artist for several cool Trek comic series, was in attendance. I brought three issues of Star Trek: The Next Generation: Mirror Broken, which visits the Mirror Universe in Picard's time. We talked about his various comic projects, his friendship with Harlan Ellison, and his podcast (Go Trek Yourself). I regret I was unable to return to the con the next day, because I would have dearly loved to have spent more time going through his original art pages.

The last comic creator on my list was Christopher Williams, better known as ChrisCross. I know him primarily for his cover work at Valiant Entertainment. And I was able to bring only one such book with me, Unity Vol 2 #0. I had tracked down a few others, but they did not arrive in time for this convention. But, in speaking with ChrisCross, I leaned of Bankshot, a series he was doing with Alex de Campi. It was canceled prematurely, but ChrisCross says the fifth issue will come out at some point. I liked the pitch, so I bought issues 1 - 4 and got them signed, too.

As we were at a comic con, I did have to visit some of the comic vendors. And I found some great items for not too much money. Here are four, two each featuring Plastic Man and Batman:


And then, I came across a book I had hoped to find before the con began: Strange Tales Vol 1 #151. The very first book Jim Steranko worked on at Marvel Comics! I purchased it and brought it over to his table for one more signature. Steranko pointed out Jack Kirby's name next to his own on the cover and said, "Look at that. I started right at the top, man." After a little more back and forth, he told me, "Jack didn't leave much room, so I'll sign here in the explosion. It will have more impact that way." Right you are, Mr. Steranko. Right. You. Are.


So all in all, a good day on the comic book front!