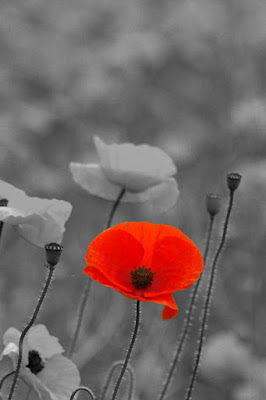 We cherish too, the Poppy red
That grows on fields where valor led,
It seems to signal to the skies
That blood of heroes never dies.

[Remember the Heroes] -- Once again, I turn to my archives for post. This time, it's the Memorial Day Weekend post from May 27, 2011 (on Prophet or Madman). And I now re-present it in its entirety for you...

We have arrived at the "official" kick-off for shorts season: a 3-day weekend that culminates in the observance of Memorial Day, formerly known as Decoration Day (check the history). Now, you might recall the 80s as being rife with anti-conflict, protest songs, so you may find it hard to believe I could find some tunes appropriate for the occasion of honoring this nation's war dead. But the 80s were as patriotic or reflective as other decades. So my only real problem was in narrowing the selections down to my usual three. So, are you wondering what gems I have chosen in tribute to those who have died while serving the United States of America? Wonder no more. Read and hear more after the jump.

Flashback #1: "You never know what you can do | until you get it up as high as you can go."

In 1986, director Tony Scott and producers Don Simpson and Jerry Bruckheimer launched Tom Cruise, Kelly McGillis, Val Kilmer, Anthony Edwards, and Tom Skerritt off an aircraft carrier and into pop-culture history. Top Gun was the highest grossing film of 1986 and broke records in the new market of home video. The film's soundtrack spent five nonconsecutive weeks and our first Flashback of the day was a large part of that success. "Danger Zone" was the first single off the soundtrack and it peaked at #2 on the Billboard Hot 100. Kenny Loggins, the affable 80s artist who performed this tune, was actually the third choice. But that was only after Bryan Adams backed out (because he was supposedly uncomfortable with "the jingoism expressed in Top Gun"), and Toto declined due to legal matters (probably something label-related). One of the most recognizable tunes from the Top Gun soundtrack, "Danger Zone" is not explicitly about honoring those who have fallen in combat. But riding the "highway to the danger zone" is exactly what our brave servicemen and women do. So it's the perfect song to start this week's Friday 80s Flashback.

Our second flashback of the day comes from a legend who stood tall among men. Johnny Cash (1932 - 2003) was probably one of the most influential musicians of the 20th century [Eugene Register-Guard]. A versatile singer-songwriter, Cash could not be confined to a single genre, and he was even inducted in both the Country Music Hall of Fame and the Rock and Roll Hall of Fame. The 80s found Cash enjoying acclaim, but his songs were barely charting. I blame that more on the prevailing attitude of the early 80s than on his choice of material. Case in point: "Song of the Patriot." Released in 1980 to minor success (#54 on the Country Singles chart), "Song of the Patriot" is a heartfelt, flag-waving ode to an America filled with Uncle Sam's nephews. This Marty Robbins-penned tune isn't my usual fare, but it's appropriate for the holiday and, hey, it's Johnny freakin' Cash! Here is The Man in Black performing "Song of the Patriot" on the Johnny Carson Show in 1980.

Our third flashback of the day was not a single. But as the regular visitors will surely know, being a single is not a requirement for a tune to make the Friday 80s Flashback. "Remember the Heroes" was the third track off Sammy Hagar's seventh solo album, Three Lock Box (1982). It was co-written by Sammy and Journey's Jonathan Cain, and it featured vocals by Loverboy's Mike Reno. The song starts with a veteran returning home to "find he's been forgotten," and it ends with another soldier's death, the wound extending to his son who must carry on with only a memory. Between each verse, the chorus implores us to "Remember the heroes," otherwise each soldier becomes "just another life to use." And eventually, tragically, lose. I pray that, in the midst of your start-of-summer fun this weekend, you will also remember the heroes. As there is no "official" video for today's final flashback, we have this fan-made video with the song set to a collection of powerful images.