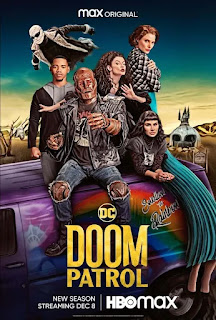 I did not realize how much I missed this bunch of misfits until we started watching the first episode. I just love this crazy bunch of mismatched beings. Their family bond just warms my heart and makes me smile. Their crazy story lines make my head spin but I wouldn't have it any other way. I love that I envision the writer's room as "what insane thing can we do now?" And then they do it ... all of them.

I would say the break between last season and this one was too long and the 'previously on' was too short to catch me up and help me remember what happened. It did affect how invested I was getting in the beginning of this season and I did have to ask Brainwise some memory jog questions.

My number one favorite part of this half season was Michelle Gomez, hands down. That woman is absolutely incredible and her role on this show just blows me away. I love how she just goes with it all and acts the hell out of her role.

I am fully aware that this show is bat $&%@ crazy and it isn't for everyone. In fact, it shouldn't be for me but I just love it. I think it says a lot about the acting, the stories, and the filming that I miss the show when it isn't on and I love to watch it when it is.

3 paws so far... still need the second half of the season