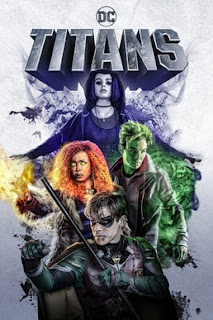 Wow, wow and wow. I truly had no idea what to expect for this show. In fact I didn't even know what it was about when I added to the watch list on HBO Max. I just knew it was comic book related and that hubby would want to watch.

And just like Doom Patrol, I couldn't imagine just how much I would love it! It is eye candy with a great story and amazing characters played with perfection by amazing actors. Hubby told me there would be characters from Teen Titans (the animated series we watch many years ago and I love), Doom Patrol and Batman.

I am completely sold and in love with Brenton Thwaites as Robin. As soon as he came on the screen in the first episode, I turned to hubby and said "that's Dick Grayson/Robin". He was EXACTLY what I think Dick Grayson would look like AND I don't even know the comic version of Dick Grayson. It was just spot on and he is incredible in the role.

Anna Diop is perfection as Kory Anders/Starfire and perfection as herself. She is gloriously beautiful and she is completely Starfire to me. I simply adore her and her acting. I love that she has no idea who she is but that doesn't even take away any confidence from her. I love that she just keeps moving forward and she doesn't wallow in her issues.

Teagan Croft brings Rachel Roth/Raven to life. On the animated Teen Titans, I recall not really knowing Raven that well. She was definitely an emotional teen and a loner but I don't recall why, Titans have given me the why and I am in. I can't wait to see where this story goes...

Ryan Potter is playing my favorite from the animated Teen Titans, Gar Logan/Beast Boy. I LOVED Beast Boy on Teen Titans and I love him on Titans. He has the quirks and the kindness and the fun that Beast Boy had on the animated series.

There are so many more characters and all are amazing. Minka Kelly would be another that stands out not only because I love her as an actress but she embodies Dawn/Dove so well. She seems all delicate and sweet but do NOT cross her as she will take you out.

We did joke at our shock that these Titans do indeed kill! They are not our animated Teen Titans... and I like that just fine. Warning though, this show is extra violent. I mean I look away soooo much during some episodes. That's the joy of cable.

Great score and music too and it is beautifully filmed. I love, love, love this show. This is one of the few shows that I have found it very hard to stop watching/binging. I just want to keep watching and see what happens next. Simply stunning, really it is.