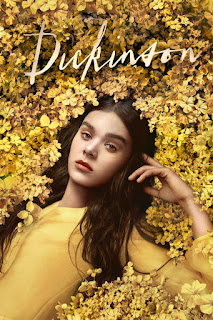 With my upgraded phone, I received a full year of Apple TV for free. I quickly signed up because I had been wanting to watch Dickinson ever since I saw the commercials for it when it came out.

Mind you, I actually know nothing about Emily Dickinson, except that she was a poet. I truly know nothing about her life and hardly any of her work but what I do know about her work, I love. So why would I want to watch this... well if you saw the commercials for this when it was coming out, it was luscious, beautiful, modern and very very clever.

Hailee Steinfeld as Emily Dickinson is perfect casting. I easily believe this is who Emily Dickinson could be if she were modern living in her era. Hailee breathes such life and death into Emily. I love Emily's family too, her brother is a dream in so many ways, her sister is hilarious and her parents are just the right kind of odd. All the extra characters are perfection also.

I love that the whole setting is Emily Dickinson's era but the script is modern, as is the music. Speaking of the music, it is glorious. Every song is perfect for the music itself and for the lyrics. I feel like sometimes the song inspires the show as much as the show inspiring the music.

I love how the poems are not only the support of each episode but how they show the poems to the audience during the episode. It helps me to hear them and read them as the poems can be quite deep and contextual if you just heard them or read them. Then add in how the episode supports the poem and this show is a dream.