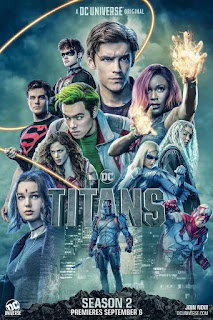 I told you this was a show I couldn't stop binging. I JUST posted about season one and we have already finished season 2.

I really feel like everyone involved in this show has been waiting to make this show. They are Titans in the industry and they have all just been waiting for everything to align to make this dream show. Each actor is perfectly cast for their character, the cinematography is spectacular and the writing is superb. I just can not get over this show. I love it.

Season two did have a rougher start than season one especially since season one was the longest introduction to a show ever but worth every second. But it didn't take me long to fall right back into step with everyone. I love the storytelling on the show and the character study episodes are like individual movies of their own. The episode "Conner" had me forgetting what show we were watching and thinking it was a whole different show (and that is not a bad thing to me). Impressive!!

One big change for season 2 was the music. Season one episodes closed with the Titans theme, which I love. Season two closes each episode with a perfect story matching song. This was a strange change at first but each song was thoughtful and perfect and some of my favorites.

I don't know when season 3 will exist but I am ready and waiting for it.

In the meantime, there is another show that I like just little more than this one... and you all know that is a huge statement since I have been raving about Titans for 2 weeks now. Stay tuned right here to see what my favorite show is, even more than this one - if that seems possible.