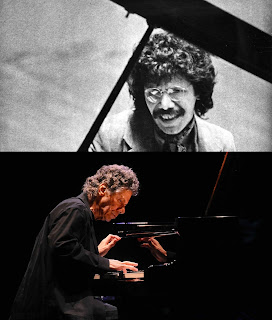 [RIP Chick Corea, 6/12/1941 - 2/9/2021] -- Keyboardist, composer and bandleader Chick Corea died this week. My late father introduced me to Corea's music, and he has since remained one of my fave artists. Still, I must admit that I do not own, and I have not even heard, the entirety of Chick Corea's catalog. It is immense: 81 studio albums, 17 live albums, and eight compilation albums (per Wikipedia). As a leader, he released 21 records between 1980 and 1990. So, even if I simply focused on his 1980s output, I would be hard pressed to select a trio of tracks as a suitable retrospective. So, how am I to honor his musical memory? Well, read and hear more after the jump.

Flashback #1: Chick Corea Elektric Band - Bern Jazz Festival 1986 (Live)
In 1986, Chick Corea released The Chick Corea Elektric Band, the self-titled debut of Corea's new jazz-fusion band. This outfit featured featured drummer Dave Weckl, bass player John Patitucci, and two guitarists: Scott Henderson and Carlos Rios. I have seen several write-ups describing this record's genre as jazz-rock. Maybe that's because the music leans more on traditional jazz, but with a certain stage rock aesthetic, than other jazz-fusion releases of that decade. I mean, sure, Corea has layered synths and keyboards on this record, sounding very much like 1980s keyboards, but the overall effort is far less atmospheric or poppy than, say, Jeff Lorber. Anyway, instead of isolating a few tracks from this record, here is a live performance of six of the album's original nine tracks. Gotta say, I'm loving that old Apple computer that's part of Corea's setup! (Note: Although Henderson and Rios split guitar duties in the recording studio for the debut album, the lineup for this performance features only Henderson.)
Flashback #2: Chick Corea Acoustic Band - Jazzgipfel Stuttgart 1988
Not only did Chick Corea release several albums with his Electric Band, he also recorded with drummer Dave Weckl and basist John Patitucci as stripped down trio: later branded as the Chick Corea Akoustic Band. The first recorded effort of this band was Summer Night: Live in 1987. I could not find a performance on YouTube, but this 1988 concert is pretty close!
Flashback #3: Children's Songs
In 1984, Chick Corea released a collection of 20 pieces called Children's Songs. He started writing the pieces for this collection in 1971, the purpose of which was "to convey simplicity as beauty, as represented in the Spirit of a child" (per the annotations). Here he performs 12 of those songs.
Once again, I remind you that the rule of three applies when doing Flashbacks. As I've made my three offerings (well, sort of), that's all till next week. Dedicated 80s-philes can find more flashbacks in the Prophet or Madman archives or via Bookended's 80s Flashback tag. As always, your comments are welcome on today's, or any other, flashback post. And if you like what I'm doing here, please share the link with your friends. If, however, you don't like the flashback, feel free to share it with your enemies.
I'll see you in seven!
Posted by Brainwise at 2/12/2021 02:14:00 PM