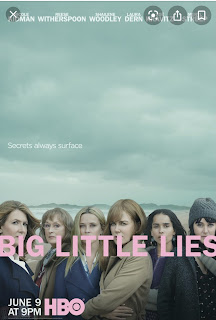 Not sure where to start with this one. My mother and sister liked this season more than the first. I was reluctant even before hearing this information as I really LOVED the first season and really didn't think they needed to do more. I was satisfied with season one and the ending. I did not need more... but they made more and it was reportedly better.

I am very late to watching it but since we had HBO Max still I decided to binge it. I will start with if you like the characters in the first season then you should watch the second. It is an excellent show and the acting is superb. I mean Meryl Streep is almost unrecognizable at times to me. Incredible cast and a good continuation of the story.

But I will add, for myself, I wish I had not watched it. I really did not like season 2 BUT at the same time I know that it is incredible. I know that sounds contradictory and it is but I can see the genius of the show and the cast but I was just so annoyed by it all. I really wish I had just let the story be but I had heard how good it was, and better than season 1 so I tried it.

Again, the cast is spectacular and Meryl Streep is perfection but I think the show was just too slow and after watching so many other shows lately that moved along it was very difficult to get into. And even though I liked the characters, this time their quirks were not so lovable to me in season 2. In fact, the quirks were distracting and it made it hard for me to take the characters seriously. Case in point, Laura Dern's character was almost a caricature for most of the episodes, it finally paid off in the final hour and it was almost too late for me but I cheered her on and felt like I was able to exorcise the season watching her.

I hear there is talk of season 3. I will definitely let others watch it first, if it happens, and then decide what to do. I am a glutton for punishment at times... especially when some of my favorite actors are involved.

although I really know it is 4 paws