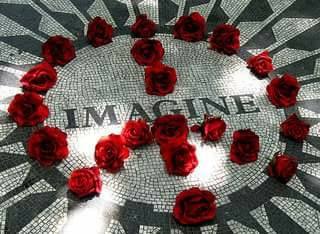 [Remembering John Lennon] -- John Lennon was shot and killed on 12/8/1980, 37 years ago today. I may not recall exactly what I was doing when I learned of Lennon's death, but I do remember understanding it as a blow not only to music, but also peace activism. He will long be remembered as a peace worker and an anti-war activist. Of course, John Lennon is primarily remembered as a musician, and he has an extensive catalog, dating back to 1962. As my focus is the 1980s, I wanted to commemorate John Lennon with a look at his work released in my favorite decade of music. I say released because he only had a brief window during which he recorded new material in 1980. Still, he was prolific, and he left behind enough material for two new records, one studio and one live. So, what have I selected for you this week? Read and hear more after the jump.

Flashback #1: "Everybody's talking and no one says a word."

If November 2016 through November 2017 had a theme song, it could very well be John Lennon's "Nobody Told Me." I mean, come on, we are truly living in "strange days indeed"! Of course, every year must feel strange to someone, right? Anyway, initial recording for "Nobody Told Me" had been done in 1980, but Lennon's untimely December death left the track incomplete. Yoko Ono completed it in 1983 and it became the first single from Lennon's eighth, and posthumously released, studio album, Milk & Honey (1984). Due to the rough take / rehearsal nature of Lennon's pre-December 1980 tracks, "Nobody Told Me" comes across more casual than Ono's six newer recordings. I have to think that this relaxed, almost conversational aspect of the song helps its appeal.

Flashback #2: "Living on borrowed time | Without a thought for tomorrow."

Another single from Milk & Honey (1984), "Borrowed Time" failed to chart in the US, but it performed fair enough in the UK. I included it in this week's Flashback for two reasons. First, too many people in business and government seem to be living and acting according to the lyric I quoted above. Second, I still have hope that a later lyric will come true: "Now I am older | The future is brighter and now is the hour."

Flashback #3: "So this is Christmas."

This song endures and resonates for two reasons. First, it's message we need. Second, after the popularity and success of "Imagine" in 1971, Lennon realized he needed a little musical honey to help people swallow his political messages. Lennon achieves the honey through little nods to, and reappropriated elements from, prior folk and traditional tunes, and he wraps them in a holiday release, just prior to the biggest "peace on earth" holiday in Western culture. His message: War is over, but only if we -- the people of the world, not our governments -- really want it and actually do something about it. Of course, how can we have peaceful relations with folks in a different region of the world when we can barely have a civil conversation with our neighbor from across the street, or the individual that sits in the next cubicle? Peace begins at home. And it begins with one person.

This sentiment rings just as true now as when John Lennon first released it as a single in December 1971. "Wait, 1971?" I can imagine you asking, "Isn't this an 80s Flashback?" Yes. But the song has been reissued multiple times and included on numerous collections. The first reissue, more or less, occurred in November 1982, so it's a valid 80s Flashback. And it's our final one for this weekend.