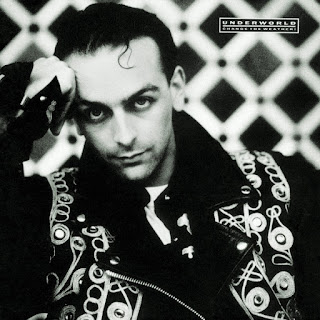 [Change the Weather] -- When we hit the beginning of December, people in southeast PA usually organize into one faction or the other. The first faction cannot wait for a "Winter Wonderland." The other one mourns the loss of shorts and flip-flops weather. What I'm saying is that one group welcomes the weather change, while the other wants to change it back. Of course, more recently, the beginning of December has trended somewhat balmy, so that aforementioned second group of flip-flop wearers doesn't have to mourn all that much just yet. All of that is a long and not very interesting intro to this week's album, Change the Weather (1989) by Brit techno rockers, Underground.  Change the Weather is Underground's sophomore record, released 12/1/1989, and it is unique in the band's discography in that it did not chart. At all. Perhaps that lack of chart activity is due to a slight change in the band's approach (more 80s pop-rock than the electric techno of, say "Born Slippy .NUXX"). Maybe it was just a dry patch. Regardless, Change the Weather is a fine 80s gem that deserves more attention. So, read and hear more about the album's first three tracks after the jump.

I guess a guy is kind of serious if he's willing to change the weather for ya. But it doesn't seem like he's got much of plan beyond getting down on his knees and praying. Still, this is a peppy little tune, so I can forgive the protagonists lack of real action and just enjoy this bit of 80s fluff.

According to Wikipedia, "Stand Up" was Underworld's biggest US hit. It peaked at #69 on the Billboard Hot 100 and #14 on the Hot Modern Rock Tracks chart. And although I cannot find much more info about this single, I did find an actual music video!

Take a lighter version of The Cult and marry it to a slow-burning rock song, then you'll have "Fever" which is the third track on Change the Weather. I'm not certain if the subject of this song is a criminal or a supernatural force, but I do know that the song makes me want to dance. At least moderately.