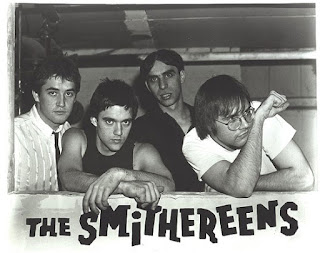 [Whither the Smithereens?] -- Perhaps you heard that Pat DiNizio of The Smithereens died this week at the age of 62. His health had been in decline since 2015 after he suffered a pair of falls that damaged the nerves of his right arm. When I saw the band in July 2016, Pat couldn't even hold, let alone play, a guitar. But he still put on a good show with his bandmates, his voice ringing clear with Jim Babjak's Marshall-driven guitar licks.

The Smithereens started in 1980 and they specialized in 1960s-ish power pop. That's not surprising considering Pat cited Buddy Holly as his biggest influence. Pat was one of the band's founders. More than that: He was their voice and primary songwriter (hence my theme, "Whither the Smithereens?", because I don't see where the band can go from here).  I can hear the Holly influence, but I wonder how many people missed that due to the Smithereens' much heavier sound. Unlike Holly, however, the Smithereens were criminally underappreciated. At least I feel they were. Anyway, in tribute to the late, great Pat DiNizio, I thought I'd flashback to the Smithereens' 80s catalog. Three of their ten studio LPs were released in the 80s, so I have plenty of fodder. Hmmm. Three albums, three flashback tracks. What will I highlight this weekend? Read and hear more after the jump.

Flashback #1: "I close my eyes and I see blood and roses."

I thought I would kick things off with "Behind the Wall of Sleep." But then I re-listened to "Blood and Roses" and its opening bass line, and I knew this was the better initiatory track. I mean, "Behind the Wall of Sleep" is probably more of a single in the traditional sense of 80s pop rock, but "Blood and Roses" is so much more indicative of the Smithereens. Pat DiNizio's lyrics here are a blend of poetry and storytelling. He's like the 1980s version of an ancient skald. "Blood and Roses" was the first single released off the Smithereens' debut album, Especially for You (1986). The album peaked at #51 on the US Billboard 200 and #5 on the UK Indie Chart. The single was a top 20 hit, peaking at #14 on Billboard's US Mainstream Rock chart. "Blood and Roses" also found its way into the 1986 movie Dangerously Close, a 1987 episode of the TV series Miami Vice, and the 1997 movie Romy and Michele's High School Reunion.

Flashback #2: "There's a time I remember | When I called you mine | Memories of your kisses | Much sweeter than wine."

"Only a Memory," the first single off the Smithereens' sophomore album, Green Thoughts (1988), is probably better known (and it has an incredible opening riff). But I've chosen the third single, "Drown in My Own Tears" as our second flashback of the day. It cracked the top 40 by hitting #34 on the US Mainstream Rock chart, but it really should have been a #1 hit. Besides, I live the old guy introducing the music video, and the video's use of split screens to feature live concert footage along with behind the scenes clips. Oh, and Babjak lays down a tasty guitar solo, too.

Flashback #3: "I get the blues before and after I'm with you."

Most folks would say "A Girl Like You" was the last song the Smithereens released in the 80s. But I'm not most people. And as long as I'm doing this blog, I count anything between 1980 and 1990 as being in the 80s. So, "Blues Before and After," the second single off 11 (1989) gets the nod even though its release date was January 22, 1990. Featuring a rhythm section that chugs along like a train, and another balls out (and all too brief) guitar solo from Babjak, this song clocks in at under 3 and a half minutes. However, I'm sure you'll agree that it lingers in your pleasure center for much, much longer. And if you don't agree, you're just wrong. But I guess you're in good company: "Blues Before and After" barely broke into the Billboard Hot 100 at #94. But it fared better on the US Mainstream Rock and US Alternative Songs charts where it peaked at #7 and #18 respectively.

So, there we have it. Three songs to toast the memory of Pat DiNizio. Once again, I remind you that the rule of three applies when doing Flashbacks. As I've made my three offerings, that's all till next week. Dedicated 80s-philes can find more flashbacks in the Prophet or Madman archives or via Bookended's 80s Flashback tag. As always, your comments are welcome on today's, or any other, flashback post. And if you like what I'm doing here, please share the link with your friends. If, however, you don't like the flashback, feel free to share it with your enemies.