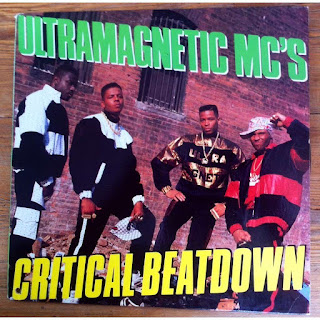 [Critical Beatdown] -- I don't know much about hip hop, but I know what I like. Or, at least, I know what makes me tap my foot and nod my head to a beat(down). And, honestly, that's about what passes for dancing -- or replaces dancing -- in my book. Anyway, speaking of beatdowns, this week in 1988 (October 4 to be precise) saw the release of Ultramagnetic MCs' debut album, Critical Beatdown. You can be forgiven if you've never heard of Ultramagnetic MCs, which is likely the case if you're only a casual consumer of rap. I don't recall how I heard of them. My guess is someone introduced me this particular album. Or a single from it. So, some background for the uninitiated might be welcome here. Kool Keith, Ced Gee, and DJ Moe Love formed the Ultramagnetics in the Bronx in 1984. They recorded a demo of "Space Groove" that same year, but didn't release their first single, "To Give You Love," in 1986. On the strength of those recordings, and Kool Keith's personality, this crew picked up a record deal.

Their debut, Critical Beatdown, is the band's only 80s release (but they do have two releases in the 90s and a 2007 reunion album). Although their debut record did not chart very well, it has come to be highly regarded as a classic hip hop album. And these MCs were pioneers of sorts. According to All-Music, Ultramagnetic MC's can claim the following firsts: they were the first rap group to employ a sampler (the E-mu SP-1200) as an instrument, the first to feature extensive use of live instrumentation, and the first to feature a former psychiatric patient (the aforementioned Kool Keith) on the mic. For more info about this crew, you can visit The Unofficial Ultramagnetic MC's Website. And, for lyrical reference, you should check out the collection at genius.com.

Now, instead of my usual format of selecting three tracks for focus, I'm sharing a YouTube playlist that has all 15 tracks from the original release of Critical Beatdown.

Let's spin some wax, shall we?

"Say what, Peter Piper? | To hell with childish rhymes! | Cause this jam is just movin' | The crowd is steady groovin' | To a supersonic pace"