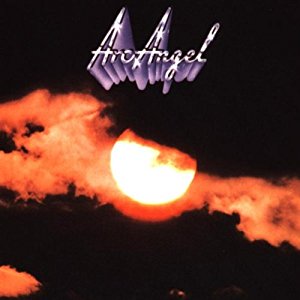 [An Under-Appreciated AOR Gem] -- I posted about Arc Angel three years ago on Prophet or Madman. Still, I still feel this particular album continues to go overlooked, so I'm digging up the previous post and re-sharing it here (with minor changes) on Bookended by Cats. Besides, cats love 80s hair metal, right? Right! So, here we go!

But before we get to the music, I feel the need to wax a little nostalgic about the nature of pre-digital music consumerism. I trust you'll bear with me.

When I was in high school, finding new music was much harder than it is today. Let me elaborate: discovering and then purchasing new music was much more difficult. OK, maybe that's still too broad a generalization or at least too much of a blanket statement. I have to assume that folks in larger metropolitan areas had easier access to new and different kinds of music because, generally speaking, they had more radio options. I, however, lived just west of ... well, let's just say the closest "metropolitan" area to my little hamlet was several hours away. We had but two radio stations -- one AM, and one FM. Oh, on particularly clear days you could maybe sniff out one or two other stations. And if you had cable TV, you could connect the cable to your stereo and access some city stations. However, no matter what radio options existed, when you tuned in, you were still subject to the whim of (usually) real human disc jockeys and -- to one extent or another -- their dedication to the record charts. Oh, there were a few renegades who played whatever the heck they wanted, but they tended to have very short tenures because their corporate overlords frowned upon such diversity.

Outside of radio, we had music magazines and -- later in my high school career -- MTV. Now, when you found out about something new and potentially interesting, you still had to get it in your hot little hands. For those of us that had limited access to decent record stores (yes, vinyl records and cassette tapes), there was mail order. I'm not talking about mail order record clubs (at least not exclusively). I'm talking about ads in the back of magazines (or as part of an interview) that directed you to send away for a particular artist's release. In the early days of MTV, particularly the late night music shows, a featured band would provide a P.O. Box you could contact and order the record that had been played. Such an order could take up to eight weeks to reach you -- talk about delayed gratification!

Back in that halcyon era of music, my good friend Joseph and I would regularly share our discoveries with each other. For example, I found Bronz on MTV's Headbangers Ball while he found Tokyo Blade (in a Metal Blade Records catalog, if I recall correctly). I don't remember which one of us found this week's featured Flashback artist, Arc Angel, but it might have been him. I base that on the fact that I have a TDK cassette of their debut, but no LP. Regardless, I'm glad I remember them. Arc Angel was essentially Jeff Cannata and Michael Soldan along with a host of studio musicians. The concept was developed after Cannata and Soldan's previous band, Jasper Wrath, folded in 1976. They continued writing songs together and, in the early 80s, pitched a demo to CBS who signed the duo to a deal. Arc Angel's self-titled debut album was released in 1983. Although the album was a hit in Europe, and the band had a music video showcased on MTV (for their sole official music video), success in the US was not forthcoming. My guess is that it was buried in the wave of other releases ... and poor reviews from dismissive critics.

If you are a fan of AOR with great guitar licks, 80s synths, and just a hint of prog that prevents a full spiral into glam, then you owe it to yourself to get swept up by Arc Angel. (And if you're looking for them on download sites like eMusic, then you'll need to search under CANNATA). For a few selections from Arc Angel's debut, read and hear more after the break.

Flashback #1: "There's so many stars in the sky | Why is it dreaming's not easier?"

Arc Angel's debut album kicks off with "Stars" (incorrectly labeled "Star" in the embedded video here). This five minute musing on the meaning of life and dreams is an example of what 80s music does best -- lift you up and charge you to go chase down your own dream! If Arc Angel had actually achieved some level of success in the states, I'm sure this tune would have been featured in a flick in which we see the lead character's coming-of-age story or witness a group of teens succeed against great odds -- perhaps both! I mean, "Stars" just sounds like it was made to be on a soundtrack!

Flashback #2: "And when the river of love is shallow | and you know you've got a long way to go. It's like you're drowning in a sea of shallows | And you're just hanging on ..."

"Sidelines" was on the second side of the album. It came right after the brief instrumental, "Before the Storm." Now that I think of it, "Before the Storm" could have been a TV theme. Maybe. Back to "Sidelines," we find a tune that features two great 80s music traditions: the laser-effect synth, and the mixed metaphor. You'll hear the laser sound, but as far as the mixed metaphor is concerned, much of the song is rather sappily poetic (note the sample lyric above). However, the song's chorus brings in a sports reference, completely out of nowhere, saying "I feel like I'm on the sidelines"! OK, this must be one of those pop songs that only make sense when you're in love ... or when you're on the difficult end of unrequited love. It's still a good listen, blending just the right amount of electric and acoustic guitars with synths and multi-tracked vocals.

Flashback #3: "Too many times I can imagine we fly | Get into my car, get high and go for a ride."

Our final Flashback of the day kicks off with a backwards recording of the words, "Never Gonna Fade Away." From there, the riff takes off and you know a catchy tune is about to hold you under its spell. One other thing is also clear in very short order: the age difference between the protagonist of the song and the object of his desire. Yes, the "Tragedy" here is that the young lady is too young. Now, in 1983, this song might have put us in mind of the unwritten rules that supposedly prevented, say, a senior from dating a freshman. But now that I'm in my late 40s (and my senses have been assaulted by news stories about age-inappropriate relationships), I see how creeptastic this song is. And the only music video Arc Angel ever made really brings that creepiness (and some brilliant 80s cheesiness) to the small screen.