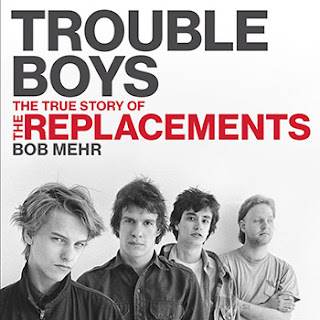 [Trouble Boys] -- Last week Sound Opinions had author Bob Mehr on their show to talk about his latest book, Trouble Boys: The True Story of the Replacements (March 2016, Da Capo Press). As I've written previously, The Replacements (or, simply, The 'Mats to their fans) are probably my favorite of what I call the "sloppy" American rock & roll bands.

According to drummer Chris Mars, the band's name reflected their sense of a secondary status: "Like maybe the main act doesn't show, and instead the crowd has to settle for an earful of us dirtbags" [Azerrad, Michael. Our Band Could Be Your Life. 2001. p. 199]. Sporting a combination of the arena blues-rock and post-punk, The 'Mats were never commercially successful, but they did receive critical accolades and have been cited as a major influence for many bands. That is likely what made lead singer and primary songwriter, Paul Westerberg, claim the band was perpetually "10 years behind and 5 years ahead."

For this post, I've chosen a few tunes from their 12+ year career. Before you check out my selections, you might want to visit the Sound Opinions episode with Bob Mehr. Or read a review of Trouble Boys. But if you're ready for my playlist, you can read and hear more after the break.

Flashback #1: "They tried to tell me that I should learn | They told me it's best I wait my turn."

The Replacements released their first album, Sorry Ma, Forgot to Take Out the Trash, in 1981. Our first Flashback of the week comes from this critically appreciated record. It wasn't a single, and it probably isn't anyone else's favorite track, but I'll bet a pack of smokes you can't find a more apt description of the band, and many of their compatriots, than "Shiftless When Idle."

Flashback #2: "Razzle, dazzle, drazzle, drone, time for this one to come home."

Our second Flashback of the week is "Hold My Life." Although never properly a single, "Hold My Life" did receive a music video. It was one of a quartet of songs off the Replacements' fourth studio album, Tim (1985), that got a video. All four videos, however, were variations on the same theme: an unbroken shot of a speaker while someone, whose face is never seen, plays the record. Interesting note: "Razzle dazzle drazzle drone" is from the cartoon Tutor Turtle. Tim was the band's first major label release, and the last record to feature the original lineup. Guitarist Bob Stinson was kicked, or fired depending on the story, by the end of 1986. He died of natural causes in 1995. That is, his body suffered the natural cause of a hard and difficult life accompanied by drug abuse. Hold my life, indeed.

Flashback #3: "A dream too tired to come true | Left a rebel without a clue."

"I'll Be You" was the first single off the Replacements' sixth studio album, Don't Tell A Soul (1989). Stinson's replacement, Slim Dunlap, debuted on this album. He must have been feeling good: Step into an established band and they have their highest charting single to date. Of course, given the band's overall lack of commercial and chart success, "highest charting" might seem faint praise. But it actually hit #1 on Billboard's Alt Rock chart.

Bonus Flashback: "We'll inherit the earth but we don't want it | It's been ours since birth, what you doin' on it?"

This Replacments' tune has what I feel is a most appropriate lyric for the whole of 2016: "We'll inherit the earth, but we don't want it." 'Nuff said.