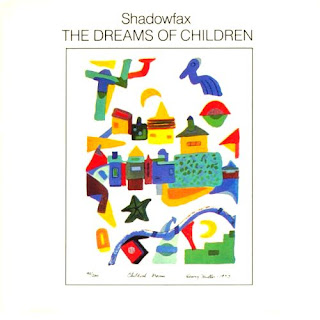 [Shadowfax Dreams] -- I thought I'd go in a slightly different direction with this week's flashback. The band Shadowfax formed in the 70s and took their name from Gandalf's horse in J. R. R. Tolkien's The Lord of the Rings. They were active until 1995 and disbanded after their bandleader died. Shadowfax didn't exactly burn up the charts or dance halls, but they did win a Grammy in 1989. You see, they were a new age band, but they were considered the loudest band in the sleepy stable of Windham Hill artists. I don't have a citation for that statement; I think I heard it on a radio show. Anyway, by the 80s, Shadowfax was filed under the category of World Music -- a description used as a marketing tool to push non-Western traditional music. There is no one definition for World Music. And, really, is there any music made on this planet that isn't world music? But, if I'm not too mistaken, World Music came to be categorized by its use of percussion and seemingly exotic instruments. So, to give you a taste of the band, I want to focus on their fourth studio album, The Dreams of Children (1984). With one exception in 1989, Shadowfax never released singles. So, I can pretty much choose any track from this record. And I'm picking my favorites. Check them out after the break.

I've had the melody line from "Another Country" in my head all week. And that's why I decided to do a flashback about the band.

The title track from The Dreams of Children gets the fan video treatment with this collection of a montage of sky images.

I'm listing "Word From the Village" as an instrumental, but it does have something of a vocal. It's less singing and more syncopated chanting, but it's an effective addition to the odd collection of real and improvised percussion instruments.