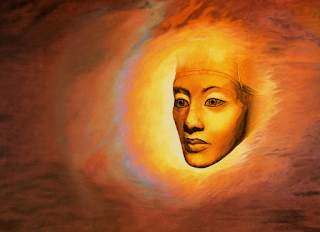 [Heavy Metal Hippie] -- From 1974 to 1978, German-born Uli Jon Roth was the lead guitarist and primary songwriter for the Scorpions. But near the end of his tenure with the band, Roth was not happy with their commercial direction. So he left them after the 1978 tour. His departure was timely as the Scorpions rocketed to the apex of their heyday after 1978. Given his reason for leaving the band, I'm guessing Roth is OK that he didn't have to deal with the Scorpions' overwhelming commercial success in the 80s anyway.

Upon exiting the Scorpions, Roth formed his own band and named it Electric Sun. They recorded and toured for three albums between 1979 and 1985. Electric Sun's first two records were Earthquake (1979) and Fire Wind (1980). Beyond the Astral Skies ( 1985) was the their third and final album, and Roth retired the band's name in 1986.

Beyond the Astral Skies is also the best known of the trilogy of Electric Sun records. I don't know if that distinction came about because it was the final album, or if it was more due to the record's ensemble nature. But after listening to these records, and seeing some photos and footage of Mr. Roth, I do know one thing: Uli Jon Roth is a heavy metal hippie who fancied Jimi Hendrix and new age cosmic trippiness. From his headband, to his bluesy riffs, to his rough and folky vocals, Roth was something else. And nowhere is this more apparent than on Beyond the Astral Skies. Think of it as a rock opera for the Kumbaya crowd. Or, as Winston Arntz writes, it's "a cross between Jesus Christ Superstar, Tommy and eighties hard rock." So, if that description has made you curious what nuggets I've selected for this week's playlist, read and hear more after the jump.

Flashback #1: "The astral skies shall open wide | The night the master comes."

There aren't many Electric Sun music videos. But thank goodness (or some other cosmic entity, perhaps) we have this promo video that was made for the re-release of Beyond the Astral Skies. It's for the album's lone single, "The Night the Master Comes," which does its bit to proclaim all the great things that will happen when The Master (probably a Cosmic Christ) returns from wherever he has been. and it also features Uli Jon Roth's invention: The Sky Guitar!

Flashback #2: "Flow, flow as a river | Through the Ocean Space and Time."

Uli Jon Roth chews through some major flower power poetry here. It's not so much about an actual river as it is about the concept of flowing time that a river can represent. It's a weaker vocal performance, but Roth's guitar chops are, as they often are, hauntingly on point.

Flashback #3: "What is Love? | Does anybody know the answer?"

To my knowledge, "What is Love?" was never released as a single. And I believe the world is poorer for that. Musically, this track muscles its way through nearly three and a half minutes of tasty guitar runs and just enough of a beat to bob your head or tap your foot in time. Roth's lead vocal isn't amazing, but the harmony vocals provided by the combo of Michael Flechsig, bassist Ule Ritgen, and Rainer Przywara more than make up for Roth's shortcomings. Lyrically, well, it lacks in philosophy, but it has that plaintive seeker mojo in spades. Or is that in crystals? You tell me.