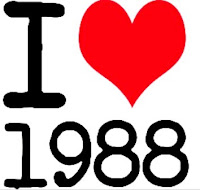 [This Week's Hot 100] -- In July of 1988, I was enjoying my second summer as a college student. However, I was back in my hometown rather than my college stomping grounds, so "enjoying" might be a bit of an overstatement. I can say I definitely enjoyed the sounds of the summer of 1988. I cranked the tunes during my shifts at the community pool's snack bar, and on my Sony Walkman when I had to run the mower around the pool's grounds. This week on the Flashback, we're going to look back upon the top three songs on the U.S. Billboard Hot 100. Do you recall what topped the chart 28 years ago this week? Read and hear more after the break!

Our first Flashback of the day was released in the U.S. on April 16, 1988. By July 9, it had climbed to the #3 position on the US Billboard Hot 100 and it would eventually peak at #2. I'm talking about "Pour Some Sugar On Me" by Def Leppard. It was the fourth single off the band's fourth studio album, Hysteria (1987), which went multi-platinum: U.S. (12× Platinum), Canada (10× Platinum),
UK (2× Platinum), and Australia (4× Platinum). Hysteria took over three years to record due to delays, not the least of which was the car accident in which drummer Rick Allen lost his left arm. Other bands would likely have found a replacement for a musician so injured. But Allen's bandmates were determined not to leave him behind. With their encouragement, and his own determination, he became a pioneer in the art of one-armed drumming. Using a custom-built, electronic drum kit, Allen can play left-handed beats with his feet. The electronic drums seemed like a natural progression in the band's ever slicker and polished sound. And, in the wake of Allen's recovery, he even went on to help wounded vets with PTSD.

There are two different intros for this song. In the original version, Joe Elliot's multi-tracked vocals begin the song with "Step inside, walk this way, you and me babe, hey hey!" before a quick cut to the guitar riff. The single version starts with an extended vocal riff on "love is like a bomb." And that is also the intro for the second music video filmed for the song, which is the video we have here for your enjoyment.

Flashback #2: "Do you wanna ride in my Mercedes boy?"

"Mercedes Boy," our second Flashback of the day, was the third single released off Pebbles' self-titled debut album. The song proved a dual chart threat by reaching #1 on the Hot R&B/Hip-Hop singles chart and peaking at #2 on the Billboard Hot 100, which is where it was this weekend in 1988. Her debut album was one of the top 10 in the U.S. Top R&B/Hip-Hop Albums for 1987. A prime example of late 80s urban dance pop, "Mercedes Boy" was the last such hit for Pebbles. In 1997, she found Jesus, changed her performing name to "Sister Perri," and founded Women of God Changing Lives (WOGCL) Ministries. She continues to preach and minister through song.

Flashback #3: "Remember, after the fire, after all the rain | I will be the flame."

Our final Flashback of the day was this week's #1 track on the U.S. Billboard Hot 100 in 1988. It was also a #1 song in Australia and Canada. This power ballad was the first single off Cheap Trick's tenth studio album, Lap of Luxury (1988), and it probably helped revive the band's career after their 1986 album, The Doctor, failed to inspire their fanbase. But Cheap Trick almost didn't get to record it: songwriters Bob Mitchell and Nick Graham first offered "The Flame" to English singer Elkie Brooks. Reportedly, the VP of Epic Records then had this tune and one other song in their hip pocket to offer to their stable of artists, and he thought "The Flame was perfect for Cheap Trick. Good choice as that other song was "Look Away" by Diane Warren, and it became a hit for Chicago.

"The Flame" was not only Cheap Trick's sole #1 hit, it was also their first hit on the Billboard Adult Contemporary chart, where it peaked at #29.