[SDCC 2016] -- I'm at the San Diego International Comic-Con this week. And this Nerdhalla is not only great for learning the latest in TV and film, tracking down your favorite comic book creators, and finding cool swag, it's also great for meeting (or reconnecting with) online folks in real life. For example, we attended the Game Of Bloggers meetup Wednesday night. So, this week on the Flashback, I thought I would turn over the tune selection to my fellow SDCC bloggers/tweeps. I asked them what their favorite 80s tune is.

And now, in no particular order, I give you my very first SDCC Mix Tape. Read and hear more after the break!

First up, @Crazy4ComicCon was right on top of my request. Without missing a (virtual) beat, he offered up "You Spin Me Round" by Dead or Alive: 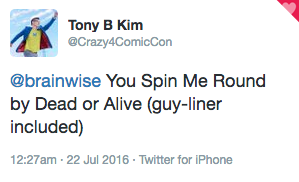 Flashback #2: "I'm waiting for that final moment | You say the words that I can't say."

Next we have @LaurenGallaway's selection of "Bizarre Love Triangle."

This comes from one of my fave 80s bands. New Order formed from the ashes of Joy Division. I wrote a little about this in the 5/24/2013 Flashback, so I won't revisit all those details here. I'll just tell you that "Bizarre Love Triangle" was released as a 1986 single from the band's fourth studio album, Brotherhood (1986). Another globe-hopping hit, it peaked at #56 and #1 in the UK (UK Singles and UK Indie charts respectively). And in the US, it reached #4 on Billboard's US Dance Club Songs and #8 on US Dance Singles Sales.

Flashback #3: "When two tribes go to war | One is all that you can score."

@EnglishmanInSanDiego rounds out today's playlist with "Two Tribes" by Frankie Goes to Hollywood. 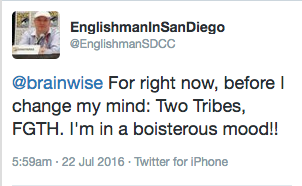 Frankie's second single, "Two Tribes" was released on 6/4/1984. And it can be found on their 1984 album, Welcome to the Pleasuredome. It was a top 10 hit around the world, peaking at the #1 position in the UK, but only reaching #48 on the US Billboard Hot 100. Still, its songwriters received the 1984 Ivor Novello award for Best Song Musically and Lyrically.

Bonus Flashback: "When two tribes go to war | One is all that you can score."

You thought we were done already? Nope! @ShadowQuill has our bonus flashback: A-ha's "Take On Me." 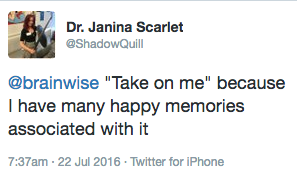 "Take On Me" is probably best remembered for it's mix of line-drawn animation and live-action in its music video. At the time, it was the closest comic lovers could get to actually diving into a comic book (quite appropriate for this week, no?). It also put Norwegian synthpop on the map, and I can't miss a chance to write "Norwegian synthpop." It was the band's only tune to chart in the US, and it peaked at #2 on the UK Singles Chart.


Once again, I remind you that the rule of three applies when doing Flashbacks. As I've made my (er, my colleagues') three offerings + a bonus, that's all till next week. Dedicated 80s-philes can find more flashbacks in the archives. As always, your comments are welcome on today's, or any other, flashback post. And if you like what I'm doing here, please share the link with your friends. If, however, you don't like the flashback, feel free to share it with your enemies.